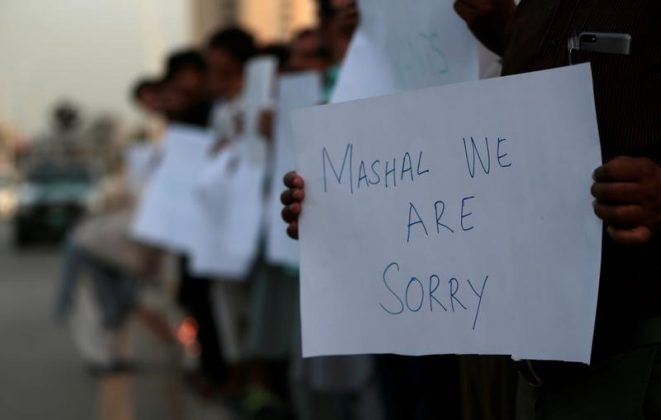 FILE PHOTO: Protesters hold placards condemning the killing of university student Mashal Khan, after he was accused of blasphemy, during a protest in Islamabad, Pakistan April 18, 2017. REUTERS/Caren Firouz

GENEVA (Reuters) – Laws prohibiting blasphemy are “astonishingly widespread” worldwide, with many laying down disproportionate punishments ranging from prison sentences to lashings or the death penalty, the lead author of a report on blasphemy said.

Iran, Pakistan, and Yemen score worst, topping a list of 71 countries with laws criminalizing views deemed blasphemous, found in all regions, according to a comprehensive report issued this month by the U.S. Commission on International Religious Freedom.

The bipartisan U.S. federal commission called for repeal of blasphemy statutes, saying they invited abuse and failed to protect freedoms of religion and expression.

“We found key patterns. All deviate from freedom of speech principles in some way, all have a vague formulation, with different interpretations,” Joelle Fiss, the Swiss-based lead author of the report told Reuters.

The ranking is based on how a state’s ban on blasphemy or criminalizing of it contravenes international law principles.

Ireland and Spain had the “best scores”, as their laws order a fine, according to the report which said many European states have blasphemy laws that are rarely invoked.

Some 86 percent of states with blasphemy laws prescribe imprisonment for convicted offenders, it said.

Proportionality of punishment was a key criteria for the researchers.

Blasphemy laws can be misused by authorities to repress minorities, the report said, citing Pakistan and Egypt, and can serve as a pretext for religious extremists to foment hate.

Recent high-profile blasphemy cases include Jakarta’s former Christian governor being sentenced to two years in jail in May for insulting Islam, a ruling which activists and U.N. experts condemned as unfair and politicized. Critics fear the ruling will embolden hardline Islamist forces to challenge secularism in Indonesia.

A Pakistani court sentenced a man to death last month who allegedly committed blasphemy on Facebook, the first time the penalty was given for that crime on social media in Muslim-majority Pakistan.

“Each of the top five countries with the highest scoring laws has an official state religion,” the report said, referring to Iran, Pakistan, Yemen, Somali and Qatar. All have Islam as their state religion.

Saudi Arabia, where flogging and amputations have been reported for alleged blasphemy, is not among the top “highest-risk countries”, but only 12th, as punishment is not defined in the blasphemy law itself.

“They don’t have a written penal law, but rely on judges’ interpretation of the Sharia. The score was disproportionately low,” Fiss said. “If a law is very vague, it means prosecutors and judges have a lot of discretion to interpret.”