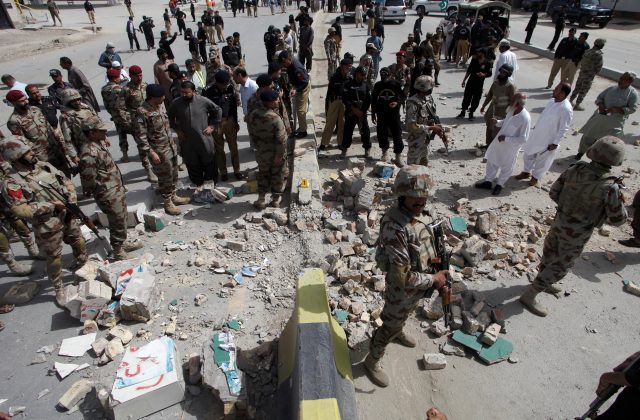 Security officials gather at the site of a bomb explosion in Quetta, Pakistan, August 11, 2016. REUTERS/Naseer Ahmed

By Asad Hashim and Gul Yusufzai

QUETTA, Pakistan (Reuters) – A roadside bomb hit a Pakistani security vehicle and wounded 13 people on Thursday in the southwestern city of Quetta, days after a suicide bombing at a hospital killed at least 74 people, most of them lawyers, officials and media said.

The driver of the police pickup truck managed to drive the damaged vehicle to the Civil Hospital of Quetta – the same facility hit in Monday’s attack – to get the wounded to medical treatment.

The truck was parked outside the hospital with its mangled bonnet, blown-out wheels and blood-stained interior later on Thursday.

About 10 police officers were guarding the entrance to the hospital.

Provincial interior minister Safaraz Bugti said Thursday’s bomb targeted police escorting a judge, who was not hurt in the attack.

“It was a judge’s car that was passing, but I believe it was the police who were the target,” he said on Pakistani television.

Medical Superintendent Abdul Rehman Miankhel told Reuters that 13 wounded people, including four members of the security forces, were being treated at the hospital.

An announcer for Geo TV warned viewers not to gather at the scene in central Quetta for fear of a second bombing, like the one on Monday.

The Monday attack hit a large group of lawyers gathered at the hospital to mourn the head of the provincial bar association who was shot dead earlier that day.

“Care must be taken that a rush not be created at the scene as the terrorists have reached the point of barbarity where they target crowds like this,” the news announcer said.

Monday’s suicide bombing was Pakistan’s deadliest attack this year. It was claimed by both a faction of the Pakistani Taliban, Jamaat-ur-Ahrar, and also by the Islamic State militant group, which has been seeking to recruit followers in Pakistan and Afghanistan.

Targeted killings have become increasingly common in Quetta, the capital of Baluchistan province that has seen rising violence linked to a separatist insurgency as well as sectarian tension and rising crime.

Later on Thursday, Bugti told Reuters that security at all potential targets was being beefed up around Baluchistan.

A Chinese-funded trade corridor with promised investment of $46 billion is due to pass through the gas-rich province and the government has promised to boost security.

“We have already done (added security) for our schools, educational institutions and universities … Watchtowers have also been constructed,” he said.

“But obviously this new threat against hospitals has emerged – we are checking that and will beef up.”