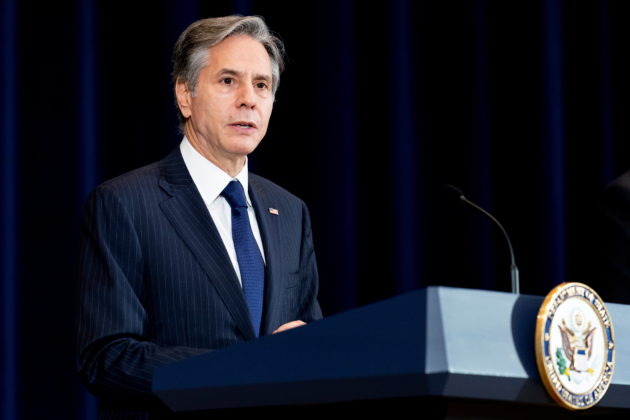 By Matt Spetalnick and Humeyra Pamuk

WASHINGTON (Reuters) -U.S. Secretary of State Antony Blinken pledged on Friday to encourage more Arab countries to normalize relations with Israel as he hosted a virtual meeting with Israeli and Arab counterparts to mark the first anniversary of a set of landmark diplomatic agreements.

The event – held with Blinken’s counterparts from Israel, the United Arab Emirates, Bahrain and Morocco – was the Biden administration’s highest-profile embrace of the so-called Abraham Accords, which were widely seen as a diplomatic success for Republican former President Donald Trump.

Democratic President Joe Biden has backed the deals since taking office in January, and senior aides have said they want more Arab countries to normalize relations with Israel after decades of enmity. But the administration until now had been cool to the idea of commemorating the anniversary of the accords.

On Friday, however, Blinken hailed their diplomatic and economic benefits, saying: “This administration will continue to build on the successful efforts of the last administration to keep normalization marching forward.”

He said the Biden administration would help foster Israel’s growing ties with the UAE, Bahrain and Morocco – as well as Sudan, which also reached a breakthrough with Israel last year – and would work to deepen Israel’s relationships with Egypt and Jordan, which have long-standing peace deals.

And Blinken said Washington would encourage more countries to follow their lead. “We want to widen the circle of peaceful diplomacy,” he said.

The leaders of Israel, the UAE and Bahrain signed the accords at the White House last September. Israel and Sudan announced in the following month that they would normalize relations, and Morocco established diplomatic ties with Israel in December, after Biden defeated Trump in the U.S. election.

Palestinian officials said they felt betrayed by their Arab brethren for reaching deals with Israel without first demanding progress toward the creation of a Palestinian state.

Some critics said Trump had promoted Arab rapprochement with Israel while ignoring Palestinian aspirations for statehood.

But Blinken, who has sought to repair ties with the Palestinians badly damaged under Trump, said: “We all must build on these relationships and growing normalization to make tangible improvements in the lives of Palestinians, and to make progress toward the long-standing goal of advancing negotiated peace between Israelis and Palestinians.”