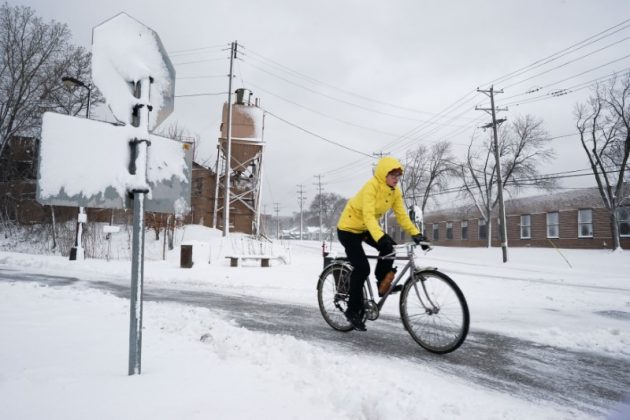 DENVER (Reuters) – A powerful blizzard slammed the U.S. Plains and Midwest on Thursday with heavy snow and fierce winds that caused power outages and closed highways while raising fears of more flooding in the Midwest after a deluge last month.

The system was dumping more than a foot (0.3 m) of heavy snow and winds were gusting up to 65 miles (105 km) per hour from northeast Colorado north to northern Wisconsin, the National Weather Service said in multiple advisories.

Whiteout conditions on roadways were making “travel extremely dangerous,” according to the weather service. Blizzard and winter storm warnings would remain in effect across the region through Friday morning, it said.

“Conditions will continue to deteriorate the rest of the afternoon and overnight,” said Dan Effertz, a NWS meteorologist in Minnesota. “This is a very potent storm.”

Local media reported dozens of crashes and cars in ditches as several major highways and roads were shut down in parts of the U.S. Plains and Midwest. Some counties issued “no travel” advisories, warning drivers to stay off the roads.

“Blizzard, day two. Not even the pack of sled dogs can handle these roads,” said Minnesota crime novelist Anthony Neil Smith on Twitter.

More than 30,000 homes and businesses were without power in Minnesota, 14,200 in Iowa and 22,700 in Michigan by midday on Thursday, according to PowerOutages.us, a website that tracks power outages.

The storm beginning on Wednesday has already dumped more than 2 feet of snow on parts of South Dakota and more than about a foot of snow in communities in Wyoming, Montana and Colorado.

The storm caused officials to close schools and governmental offices in dozens of communities.

In addition to snow, the storm was bombarding the region with rain, sleet, freezing rain and thunderstorms.

“You can probably even throw in the kitchen sink at this point,” the weather service said in a Tweet.

The blizzard, dubbed a “bomb cyclone” because of its rapidly intensifying funnel shape, is the second one to hit the region over the past month.

In March, another “bomb cyclone” triggered heavy rain over the region and combined with melting snow to cause flooding along the Missouri River and its tributaries. Damages and losses to property, cattle and crops in Nebraska and Iowa alone were estimated at more than $3 billion.

Officials in Nebraska on Thursday were cautiously watching the forecast and river levels to the north, said Jodie Fawl, a spokeswoman for the Nebraska Emergency Management Agency.

“We are waiting to see what happens when the snow melts,” she said, noting that warm temperatures since then have thawed the ground and could result in less flooding. “We are just going to have to wait and see.”

Despite the severe weather, crew members at Denver International Airport worked through the night to remove snow from runways, and only about 180 flights were canceled on Thursday morning, down from more than 700 a day earlier, according to FlightAware.come, a flight tracking service, and airport officials.