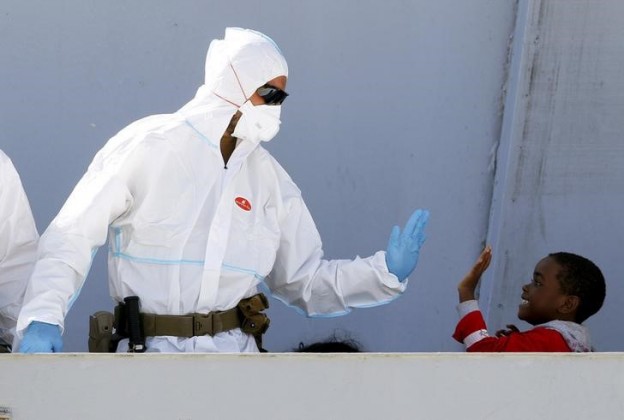 A rescue worker greets a child as they arrive on the Italian naval vessel Fulgida, in the Sicilian harbour of Augusta, Italy, February 24, 2016. REUTERS/Antonio Parrinello

ABOARD THE TOPAZ RESPONDER (Reuters) – Ships manned by humanitarian organizations, the Italian navy and coast guard helped rescue about 4,500 boat migrants on Thursday as calm seas returned to the Mediterranean, prompting a surge in departures from North Africa.

Rescue operations were continuing, an Italian coast guard spokesman said. The corpse of a woman was taken from a large rubber boat, and the migrants were collected from a total of about 40 different vessels, he said.

The Topaz Responder, a ship run by the Malta-based humanitarian group Migrant Offshore Aid Station (MOAS), said earlier in the day that around two dozen migrant boats had been spotted in the sea about 20 nautical miles from the Libyan port city of Sabratha.

Libya’s navy intercepted about 1,000 migrants on board eight rubber boats off Sabratha on Thursday morning, spokesman Ayoub Qassem said. He said the migrants were from Arab as well as sub-Saharan African countries.

“The mass movement is probably the result of week-long, unfavorable weather conditions” that have come to an end, MOAS said on Twitter.

The Italian navy said it had rescued 515 from two dinghies, German humanitarian group Sea-Watch said it had 100 on board, and the Italian coast guard, which coordinates rescue operations, said it had deployed several boats.

An agreement between Turkey and the EU to stop migrant departures for the Greek islands has reduced boat arrivals by 98 percent during the first five months of the year from the same period of 2015, the International Organization for Migration (IOM) said.

But arrivals in Italy continue at about the same clip as last year, and the deadly central Mediterranean route has already claimed 2,438 lives, IOM said.

Italy has been on the front line of Europe’s worst immigration crisis since World War Two and now in its third year. More than 320,000 boat migrants came to Italy from North Africa in 2014-15.

As of Wednesday, 56,328 boat migrants had been brought to Italy in 2016, a 5.5 percent decrease on the same period of last year, according to the Interior Ministry.

Nigerians, Eritreans and Gambians were the top three migrant nationalities this year, the ministry said, and more than 125,000 are now living in Italian shelters.