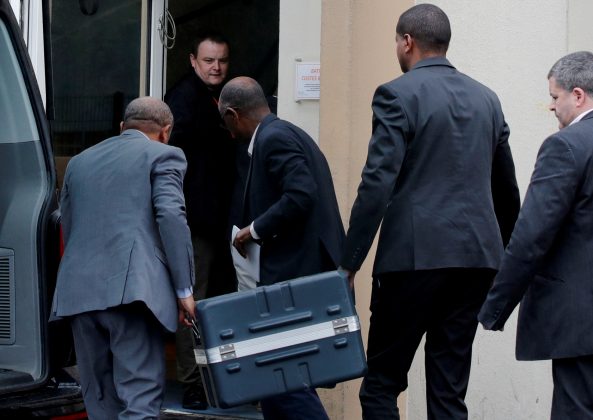 By Richard Lough and Aaron Maasho

PARIS/ADDIS ABABA (Reuters) – Investigators in France on Friday examined the black boxes of a Boeing 737 MAX that crashed in Ethiopia, as a spooked global airline industry waited to see if the cause was similar to a disaster in Indonesia months before.

Ethiopian Airlines flight 302 crashed soon after take-off from Addis Ababa last weekend, killing 157 people, the second such calamity involving Boeing’s flagship new model after a jet came down off Indonesia in October with 189 people on board.

In both cases, pilots asked to return minutes into flight.

The international repercussions are huge. Regulators have grounded the 737 MAX around the world, and the U.S. planemaker has halted next deliveries of the several thousand planes on order for a model intended to be the future industry workhorse.

U.S. aviation authorities say information from the wreckage in Ethiopia plus newly-refined data about its flight path indicated some similarities.

Two sources said investigators retrieved from the wreckage a piece of a stabilizer, which moves the nose up and down, that was set in an unusual position – one similar to that of the Lion Air plane that crashed in Indonesia.

Pilots were waiting anxiously for the investigation.

“The pilot must have gotten some sort of indication that maybe the airspeed was unreliable or something and decided, instead of climbing and going to sort out the problem up there, the best thing was to return to have it sorted.”

Boeing, the world’s biggest planemaker, has said the 737 MAX is safe, though it plans to roll out a software upgrade in the coming weeks. It continued to produce at full speed at its factory near Seattle, but paused shipments.

French authorities have possession of the flight data and cockpit voice recorders, though Ethiopia is formally leading the investigation and U.S. experts are in Paris and Addis Ababa too.

The New York Times said the Ethiopian captain, Yared Getachew, initially reported a “flight control” problem in a calm voice before asking to return in panicked tones three minutes into the flight. “Break break, request back to home,” he told controllers, the newspaper reported, citing a person who had reviewed the communications.

The jet initially flew below the minimum safe height for its climb, then once at higher altitude was oscillating up and down by hundreds of feet, all at abnormal speed, the Times said. It then disappeared from radar over a restricted military zone and lost contact with air controllers five minutes after take-off. 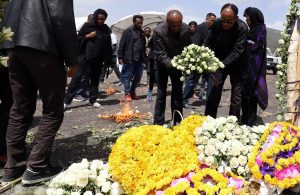 Relatives lay flowers as they pay homage to victims during a commemoration ceremony at the scene of the Ethiopian Airlines Flight ET 302 plane crash, near the town Bishoftu, near Addis Ababa, Ethiopia March 14, 2019. REUTERS/Tiksa Negeri

In Ethiopia, grieving relatives have been visiting the charred and debris-strewn field where the jet came down to pay last respects. Only fragments remain, meaning it may take weeks or months to identify all the victims who came from 35 nations.

Some families stormed out of a meeting with Ethiopian Airlines on Thursday complaining about lack of information.

Israeli Ilan Matsliah flew to Ethiopia hours after confirming his brother was on board, thinking it would be quick to find remains for burial in accordance with Jewish tradition.

“We are now stuck in the same place, the same as Monday. We are very emotional.”

With heightened global scrutiny, the head of Indonesia’s transport safety committee said a report into the Lion Air crash would be speeded up for release in July or August.

A preliminary report focused on maintenance, training and the response of a Boeing anti-stall system to a recently replaced sensor.

As the ripple-effect from the Ethiopia crash spread, Canada’s biggest carrier Air Canada suspended financial forecasts for the first quarter and the year, two days after its MAX jets were grounded. It had expected the MAX to deliver significant savings on fuel and maintenance costs.

A potential new Chinese order for more than 100 jets worth well over $10 billion was thrown into doubt.

Legal experts said even non-U.S. families of the Ethiopia victims may be able to sue Chicago-based Boeing in the United States – where payouts are larger – as eight of the dead were American and plaintiffs may argue liability hinges on system design and safety decisions made by executives.

Boeing, one of the biggest companies by market capitalization on the Dow Jones and a darling of the market, has seen its shares lose 13 percent since the crash.

Its shares had hit record highs just a week before, having risen a stunning 52 percent since the end of December, and were still up 19 percent year-to-date.