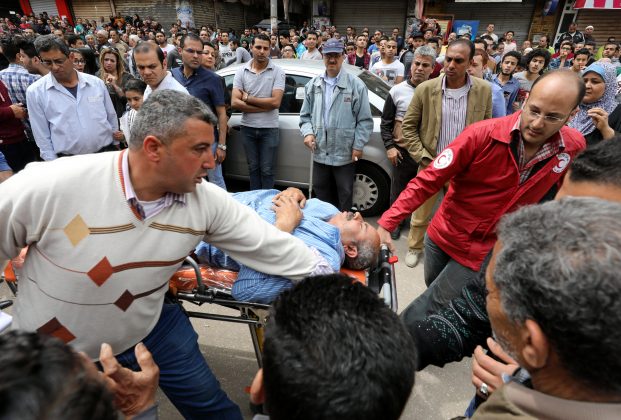 A victim is seen on a stretcher after a bomb went off at a Coptic church in Tanta, Egypt, April 9, 2017. REUTERS/Mohamed Abd El Ghany

By Arwa Gaballa and Ahmed Tolba

TANTA,Egypt/CAIRO (Reuters) – At least 43 people were killed in bomb attacks on two Egyptian Coptic churches on Palm Sunday that included the seat of the Coptic Pope, the latest assault on a religious minority increasingly targeted by Islamist militants.

Islamic State claimed responsibility for the attacks, which also injured more than 100 people and occurred a week before Coptic Easter, with Pope Francis scheduled to visit Egypt later this month.

The first bombing, in Tanta, a Nile Delta city about 100 km (60 miles) north of Cairo, tore through the inside of St. George Church during its Palm Sunday service, killing at least 27 people and injuring at least 78, the Ministry of Health said.

The second, carried out a few hours later by a suicide bomber in Alexandria, hit Saint Mark’s Cathedral, the historic seat of the Coptic Pope, killing 16 people, including three police officers, and injuring 41, the ministry added.

Coptic Pope Tawadros, who had attended mass at Saint Mark’s Cathedral, was still in the building at the time of the explosion but was not harmed, the Interior Ministry said.

“These acts will not harm the unity and cohesion of the people,” Tawadros said later, according to state media. 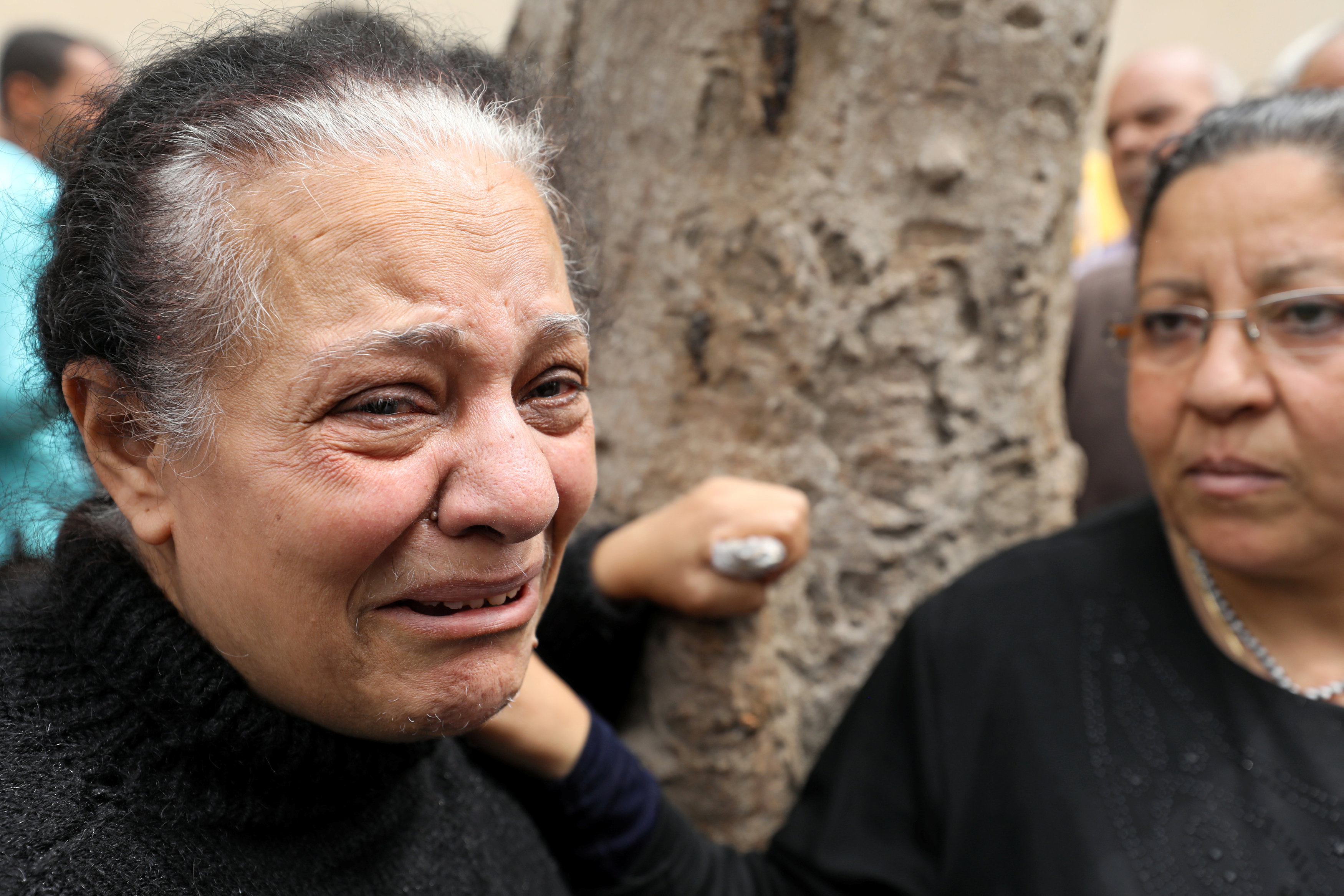 A relative of one of the victims reacts after a church explosion killed at least 21 in Tanta, Egypt, April 9, 2017. REUTERS/Mohamed Abd El Ghany

Deflecting Western criticism that he has suppressed political opposition and human rights activists since he won election in 2014, Sisi has sought to present himself as an indispensable bulwark against terrorism in the Middle East, and he identifies militant Islam as an existential threat.

“The attack…will only harden the determination (of the Egyptian people) to move forward on their trajectory to realize security, stability and comprehensive development,” Sisi said in a statement.

Thousands gathered outside the Tanta church shortly after the blast, some weeping and wearing black.

They described a scene of carnage. “There was blood all over the floor and body parts scattered,” said a Christian woman who was inside the church at the time of the attack.

“There was a huge explosion in the hall. Fire and smoke filled the room and the injuries were extremely severe,” another Christian woman, Vivian Fareeg, said.

Islamic State’s branch in Egypt appears to be stepping up attacks and threats against Christians, who comprise about 10 percent of Egypt’s 90 million people and amount to the biggest Christian minority in the Middle East.

In February, scores of Christian families and students fled Egypt’s North Sinai province after a spate of targeted killings.

Those attacks followed one of the deadliest on Egypt’s Christian minority, when a suicide bomber hit its largest Coptic cathedral, killing at least 25 people. Islamic State later claimed responsibility for that attack.

Islamic State has waged a low-level war against soldiers and police in Egypt’s Sinai Peninsula for years. It now seems to be changing tactics, targeting Christian civilians and broadening its reach into Egypt’s mainland. That is a potential turning point in a country trying to prevent a provincial insurgency from spiraling into wider sectarian bloodshed.

Though Copts have in the past faced attacks by Muslim neighbors, who have burnt their homes and churches in poor rural areas, the Christian community has felt increasingly insecure since Islamic State spread through Iraq and Syria in 2014 and ruthlessly going after religious minorities.

“Of course we feel targeted, there was a bomb here about a week ago but it was dismantled. There’s no security,” said another Christian woman in Tanta. She was referring to an attack earlier this month near a police training center that killed one policeman and injured 15..

Wahby Lamie, who had one nephew killed and another nephew injured in the Tanta blast, expressed exasperation at the growing number of attacks.

“How much longer are we going to be this divided? Anyone who’s different from them now is an infidel, whether they’re Muslim or Christian. They see them as infidels,” he said.