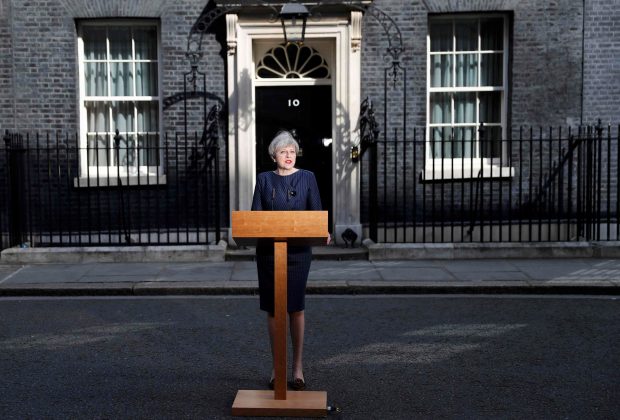 LONDON (Reuters) – Whatever Prime Minister Theresa May’s Conservatives promise in their manifesto before a June election, managing Britain’s exit from the European Union will limit her opportunity to push wide-ranging radical domestic change.

Brexit is already diverting government attention from other, often pressing, issues – the number of laws coming into force has dived to a 20-year low – and parliament will be occupied for a long time in deciding the fate of EU legislation introduced during Britain’s four-decade membership of the bloc.

May, who was appointed prime minister shortly after Britain voted last year to leave the EU, has framed the election on June 8 as an opportunity to bolster support for her Brexit plan, while saying it will help her put her own stamp on government.

She will rip up several of the pledges made by predecessor David Cameron and hope a bigger majority will secure parliamentary backing for some more contentious measures, such as opening new selective schools and capping energy prices.

But beyond a few flagship policies she is most passionate about, Brexit will dominate.

The complexity of delivering Brexit will sap government and parliamentary time, possibly requiring as many as 15 pieces of major legislation, and leave little room for domestic policy promises.

“The reality is that Brexit eclipses so many other legislative priorities, and will do for years to come,” said Daniel Greenberg, a legal adviser on domestic legislation to the lower House of Commons.

The manifesto, expected to be published early next month, will set out the promises May has made on Brexit, including plans to leave the EU’s single market, end free movement of people from the remaining member states and pull out of the European Court of Justice, which rules on EU law.

But it is unlikely to go into detail on her negotiating stance after months of keeping her cards close to her chest.

Analysis by Thomson Reuters legal business shows 1,642 pieces of legislation were introduced in 2016, down 29 percent from the previous year and the lowest level since 1997.

“The last government slowed down on legislative activity ahead of the vote, and now the decision has been taken to leave the EU, only the more favored non-Brexit related issues are going to see significant legislative attention,” said Greenberg.

The government proposes to convert all EU laws into domestic legislation, after which further parliamentary time will be spent deciding which should then be amended, replaced or repealed.

On top of this, the Institute for Government (IFG) think tank predicts 10 to 15 new bills and thousands of pages of secondary legislation will need to be passed by parliament to put in place arrangements in areas such as immigration and customs before Britain’s expected EU departure in March 2019.

On average the Queen’s Speech, which sets out the government’s legislative programme for the year, contains around 20 flagship bills, leaving little room for non-Brexit measures.

The government, which is cutting spending to reduce the budget deficit, also does not have the capacity to focus on major new policies unrelated to Britain’s EU exit.

Some of the ministries set to be heavily involved in Brexit preparations, such as the Home Office and the Department for Environment, Food and Rural Affairs, have faced the biggest cuts to their budgets and staffing levels, according to the IFG.

“Brexit is going to take so much public policy time, political time and cabinet time that I am not sure how this country can address all of the other things it needs to address,” said Brigid Laffan, director of the European University Institute’s Robert Schuman Centre.

Beyond leaving the EU, voters cite healthcare as the next biggest issue facing the country, followed by immigration, the economy, housing and education, according to pollsters YouGov.

The government has been under pressure on many of these issues, with housebuilding falling well short of its promised level, immigration running at nearly three times its target, and schools complaining of cuts to funding.

The Conservative manifesto for the last election in 2015 included a pledge to spend at least an additional 8 billion pounds ($10 billion) on the National Health Service (NHS) by 2020, but the chief executive of NHS England has said it needs as much as 21 billion pounds.

That manifesto also promised to cap residential social care charges for the elderly from 2016, but shortly after the election the government announced this would be delayed to 2020.

“Having such a Brexit-obsessed government means that they are not doing their day job. They are not providing the decent public services that people want,” former Liberal Democrat leader and deputy prime minister Nick Clegg told the BBC.

Yet with the opposition Labour Party divided and accused of lacking a clear message on Brexit, polls suggest May’s Conservatives will be returned to power with a bigger majority.

That gives her the freedom to focus on Brexit and a handful of other measures which she might otherwise have struggled to get past even her own party, such as new selective grammar schools, or those which are less traditionally associated with the Conservatives’ laissez-faire economic policy.

May’s “modern industrial strategy” – a interventionist approach to rebalance Britain’s heavily services-based economy – will feature, while ministers have said there will also be a pledge to act in the energy market, possibly through a cap on prices for domestic customers.

The Conservatives have also raised the prospect of scrapping a 2015 promise not to raise three taxes which are the state’s biggest revenue raisers and to protect pension increases.

Last month finance minister Philip Hammond was forced to reverse plans to raise payroll taxes for the self-employed amid accusations that it broke that manifesto pledge.

“It’s self-evidently clear that the commitments that were made in the 2015 manifesto did, and do today, strain the ability of the government to manage the economy flexibly,” Hammond said during a trip to Washington last week.