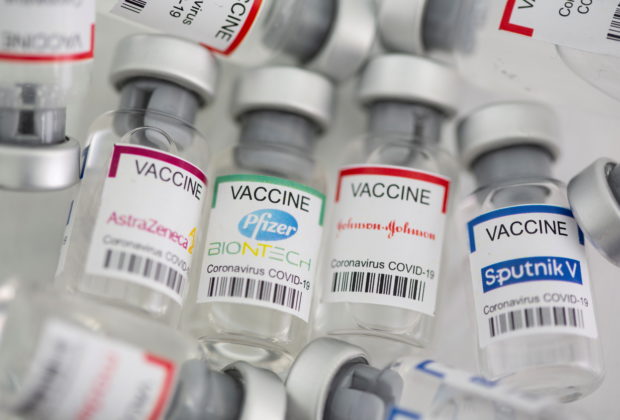 LONDON (Reuters) -Britain is open to talks with the United States and other World Trade Organization members on the issue of IP waivers for COVID-19 vaccines, a government spokesman said after pressure from charities to back U.S. proposals.

British and European Union officials have been skeptical about the usefulness of the proposal, while saying they are prepared to discuss it.

“We are engaging with the U.S. and other WTO members constructively on the TRIPS waiver issue, but we need to act now to expand production and distribution worldwide,” the British government spokesman said, adding WTO negotiations on the waiver would be lengthy as they would need unanimous support.

“So while we will constructively engage in the IP discussions, we must continue to push ahead with action now including voluntary licensing agreements for vaccines.”

Britain has promised to donate surplus vaccines to other countries when it is able to, but says it has no spare shots to give at the moment.

About two-thirds of the adult population of Britain has received a dose of a COVID-19 vaccine, while Britain has ordered 517 million doses in all.

Hundreds of charities, academics and politicians this week signed a letter to Prime Minister Boris Johnson calling on him to back Biden’s move on IP waivers.

Pharma companies and other critics of the waiver move say producing COVID-19 vaccines is complex and setting up production at new facilities would divert resources from efforts to boost production at existing sites, potentially compromising safety.

On Tuesday around a dozen protesters sat outside AstraZeneca’s headquarters in Cambridge, eastern England, to coincide with the pharma firm’s annual general meeting (AGM). Some chained themselves to the doors and others unfurled a banner saying “People’s Vaccine not Profit Vaccine.”

AstraZeneca, which has entered into manufacturing partnerships to produce Oxford University’s vaccine candidate globally, has pledged to not profit from sales of the vaccine during the COVID-19 pandemic, though the campaigners highlight that the company can determine when that pledge ends.

Asked about the British government’s stance, an AstraZeneca spokesman said the company agreed that the “extraordinary circumstances of the COVID-19 pandemic call for extraordinary measures”, and that this had already informed its approach.

“We have established 20 supply lines spread across the globe and we have shared the IP and know-how with dozens of partners,” the spokesman told Reuters. “In fact, our model is similar to what an open IP model could look like.”

AstraZeneca Chief Executive Pascal Soriot said last month that it would maintain its no-profit pledge into 2022, and would keep no-profit or modest pricing for parts of the world thereafter.