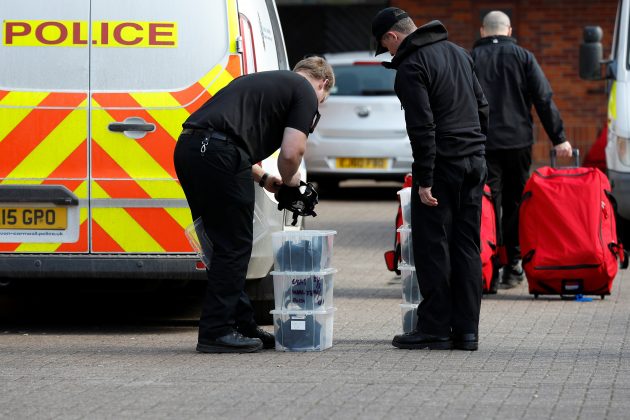 Inspectors from the Organisation for the Prohibition of Chemical Weapons (OPCW) arrive to begin work at the scene of the nerve agent attack on former Russian agent Sergei Skripal, in Salisbury, Britain March 21, 2018. REUTERS/Peter Nicholls

By Gabriela Baczynska and Robin Emmott

BRUSSELS (Reuters) – Britain is seeking help from other European countries to take action against Russian spy networks that could be preparing similar attacks as the nerve agent assault on a former Russian spy in England, diplomats said.

Britain’s Prime Minister Theresa May will urge “coordinated action” among European Union governments at a summit in Brussels on Thursday, where she will also try to persuade the bloc’s leaders to condemn Russia squarely over the attack in Salisbury.

May accused Russia of the first known offensive use of a nerve toxin in Europe since World War Two after Sergei Skripal, a former Russian double agent, and his daughter were found unconscious on a public bench in the English city on March 4.

In the worst crisis between the two powers since the Cold War, May has expelled 23 Russian diplomats whom she says were spies working under cover. Moscow, which has denied involvement in the attack, has taken retaliatory steps.

“Britain says there are these networks that organize such things like Salisbury, that these networks exist across our borders and that it would be good to go after them together,” a senior EU diplomat said.

“They have already been approaching EU states on that bilaterally and today May will tell EU leaders more.”

Diplomats stressed May was not seeking a formal or immediate EU strategy because the bloc has little joint competence on intelligence, meaning any such work would be done directly with other governments.

“There is movement among several willing states to do something together in reaction to Skripal,” said another EU diplomat. This could be done bilaterally outside the EU so as not to press too hard on those bloc members worried about their ties with Moscow, the person said.

Reluctance from countries – Greece and Hungary among them – mean a draft joint statement by EU leaders now says only that they take “extremely seriously” London’s assessment that it was highly likely Russia was responsible for the attack.

But May will push fellow EU leaders to blame Moscow directly for the poisoning of the Skripals who British authorities say have been critically ill since the attack by a Soviet-produced military-grade nerve agent called Novichok.

A British official confirmed London was seeking to work with groups of countries on intelligence sharing over spy networks.

“Russia has shown itself as a strategic enemy, not a strategic partner,” said another British official, who stressed however that Britain was not seeking new economic sanctions.

May will seek to demonstrate to EU governments that all Western countries are vulnerable to such attacks, as well as what NATO says is a Russian strategy to undermine the West, officials said.

“The Russia threat does not respect borders and as such we are all at risk,” a second senior British official said.

May will need to overcome reluctance from the Russia doves in the EU since the bloc is traditionally split on how to deal with Moscow.

Ties between Moscow and the West plummeted over Moscow’s 2014 annexation of Crimea from Kiev and support for rebels in east Ukraine, which have triggered sanctions by the EU.

French President Emmanuel Macron said on Wednesday the Salisbury attack could not go without response.

Macron and May, German Chancellor Angela Merkel and U.S. President Donald Trump, have already said in a joint statement they “share” Britain’s assessment of Russian responsibility.

Diplomats said EU leaders could to settle for similar language, though some bloc members remained concerned there was not enough direct proof to incriminate Russia in the attack.

European Council President Donald Tusk, who will chair the summit and has sided with Britain, said: “It is clear we should improve our preparedness for future attacks.”

He wants the bloc to discuss how to better protect itself from chemical and biological attacks, including in cooperation with NATO, as well as to how to beef up counter-intelligence capabilities to combat hybrid threats.