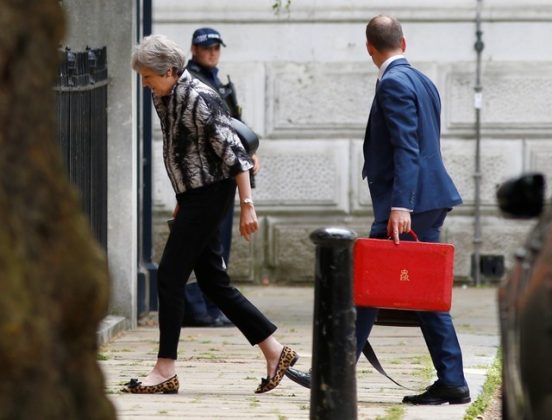 By William James and Elizabeth Piper

LONDON (Reuters) – Prime Minister Theresa May bowed to pressure from Brexit supporters in her governing Conservative Party on Monday, accepting their changes to a customs bill that underpins Britain’s departure from the European Union.

May, vulnerable in parliament after losing her party’s majority at an ill-judged election last year, has come under fire from both wings of her party over a hard-won Brexit plan, with one ex-minister calling it the “worst of all worlds”.

Eurosceptic lawmakers had targeted her government’s customs legislation to try to toughen up her plans to leave the EU, but instead of facing them down and fuelling tensions, her spokesman said the government would accept their four amendments.

It was not clear the move would fundamentally change her plans – the changes do little more than to put government policy into law, her spokesman said – but it was a victory of sorts for those lawmakers who say May has betrayed them on Brexit, the biggest shift in British trade and foreign policy for decades.

“We will be accepting those four amendments,” the spokesman told reporters, saying the government believed they were “consistent” with the white paper policy document ministers agreed earlier this month.

“We have accepted these amendments because we believe them to be consistent with the approach that was set out and agreed at Chequers,” he said.

May had to fight hard to get the agreement of cabinet ministers at her Chequers country residence for her vision for Britain’s future ties with the EU, only for it to be undermined by the resignations last week of her Brexit minister David Davis and foreign secretary Boris Johnson.

The plan, only a starting point for the second phase of talks with the EU, has come under fire from other eurosceptic lawmakers, who say the proposal to keep close customs ties to the EU betrays her commitment for a clean break with the bloc.

The battle over the amendments to the Taxation (Cross-border Trade) Bill, or customs bill, is unlikely to be the last that May and her team will have to face.

“WORST OF BOTH WORLDS”

On Monday, the other wing of May’s Conservative Party – those lawmakers who want to keep the closest possible ties with the EU after Brexit – spoke up in the voice of former education minister Justine Greening who called for a second referendum.

Greening said such a vote was the only way to break the stalemate in parliament over the best future relationship with the bloc and branded May’s plan as “a fudge I can’t support. It’s the worst of both worlds”.

May’s spokesman said there would be no second referendum under any circumstances, and restated her position that the Chequers plan was the only way to deliver a Brexit that worked in the best interests of the country.

Another pro-EU lawmaker Dominic Grieve, who has led previous efforts to get the government to soften its Brexit stance, said the party needed to accept compromises “or accept that Brexit cannot be implemented and think again about what we are doing”.

For now the impetus lies with the Brexit supporters.

Jacob Rees-Mogg, an arch eurosceptic who proposed the amendments, said he did not expect the bill, or another bill on trade due to be debated on Tuesday, to be blocked outright by the 650-member parliament. Rees-Mogg said that he wanted rather to test the support in parliament for changing her strategy.

“I’m sure Theresa May does not want to split the Conservative Party and therefore she will find that the inevitable consequence of the parliamentary arithmetic is that she will need to change it (the Brexit policy) to keep the party united,” Rees-Mogg said.