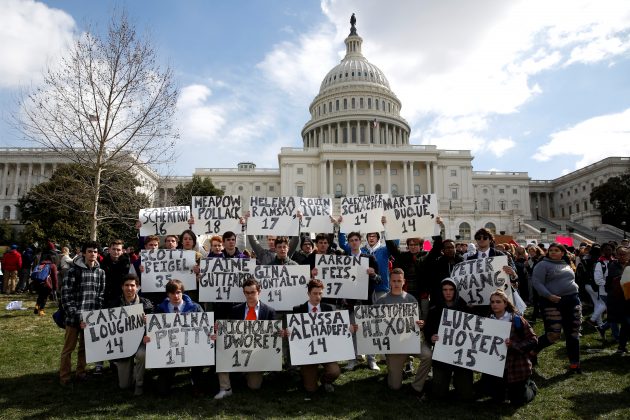 Students from Gonzaga College High School in Washington, DC, hold up signs with the names of those killed in the Parkland, Florida, school shooting during a protest for stricter gun control during a walkout by students at the U.S. Capitol in Washington. REUTERS/Joshua Roberts

HARRISBURG, Pa. (Reuters) – A rural Pennsylvania school district has equipped all 200 of its classrooms with buckets of rocks that students and teachers could use as a “last line of defense” in the event of a school shooting, the district’s superintendent said on Friday.

The buckets are just one of the measures that Blue Mountain School District in Orwigsburg, Pennsylvania, has put in place this academic year, along with security cameras, secured building entrances and fortified classroom doors, Superintendent David Helsel said in a telephone interview.

“We didn’t want our students to be helpless victims,” Helsel said. “River stones were my idea. I thought they would be more effective than throwing books or book bags or staplers.”

Last month’s massacre of 17 students and educators at Marjory Stoneman Douglas High School in Parkland, Florida, sparked fresh debate in the United States over how to prevent school shootings.

Hundreds of thousands of Americans are expected to join rallies in Washington and around the country on Saturday calling for tighter gun laws in “March for Our Lives” protests organized by the young survivors of the Parkland shooting.

Helsel said the idea of equipping classrooms with rocks grew out of his reading of the active-shooter defense program known as ALICE, which stands for Alert, Lockdown, Inform, Counter, Evacuate.

He first spoke about the rock buckets in testimony at the Pennsylvania state house in Harrisburg last week.

Helsel said his school board approved the rock buckets before they were put in the classrooms at the district’s five schools last fall. Parents in Orwigsburg, about 92 miles (148 km) northwest of Philadelphia, have been mostly supportive, he added.

“It is so unbelievably tragic that our society has come to a point where schools have to arm themselves with buckets of rocks to defend the against active shooters,” said Robert Conroy, director of organizing with gun-control group CeaseFirePA. “We should be talking about real reform of gun laws.”