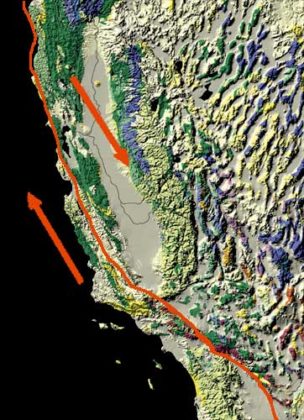 A series of earthquakes have been hitting California in the last few days.

According to The Wall Street Journal, the quakes began Monday at 10:33 p.m., when a magnitude 4.5 temblor rattled out of the suburbs of Contra Costa County, in the East Bay about 20 miles northeast of San Francisco. The USGS reported at least 26 aftershocks following the tremor, Then, on Tuesday at 12:42 p.m., a magnitude 4.7 quake struck in the remote mountains of San Benito County. No major structural damage was reported.

On Tuesday evening another earthquake this one rated at 3.4 also struck the Pleasant Hill area. The quake was recorded at 7:11 p.m. pacific, Tuesday, Oct. 15 and was centered under Pleasant Hill at a depth of 9 miles, the USGS reported.

Monday’s quake was the latest reminder that seismic forces put the East Bay at high risk of a major earthquake, including from the dangerous Hayward Fault, which runs along heavily populated areas. The Los Angeles Times also reported that the earthquakes struck on an unusual section of San Andreas fault known for ‘creeping’, a series of smaller earthquakes that could lead to larger ones along the fault line.

“This is the 10th earthquake larger than magnitude 4 in the last 20 years in this area” within a radius of about six miles from Tuesday’s epicenter said Keith Knudsen, USGS geologist and deputy director of the agency’s Earthquake Science Center.

In 2008 the USGS created “The Great ShakeOut” scenario to warn communities to prepare the bay area for larger quakes. This scenario was based on a potential magnitude 7.8 earthquake on the southern San Andreas Fault— approximately 5,000 times larger than the magnitude 5.4 earthquake that shook southern California on July 29, 2008. It’s not a matter of if an earthquake of this size will happen—but when.

Dr. Lucy Jones of the U.S. Geological Survey led a group of over 300 scientists, engineers, and others to study the likely consequences of this potential earthquake in great detail. The result is the ShakeOut Earthquake Scenario, which was also the basis of a statewide emergency response exercise, Golden Guardian 2008.

In an earthquake of this size, the shaking will last for nearly two minutes. The strongest shaking will occur near the fault (in the projected earthquake, the Coachella Valley, Inland Empire and Antelope Valley). Pockets of strong shaking will form away from the fault where sediments trap the waves (in the projected earthquake, it would occur in the San Gabriel Valley and in East Los Angeles).
Such an earthquake will cause unprecedented damage to Southern California—greatly dwarfing the massive damage that occurred in Northridge’s 6.7-magnitude earthquake in 1994. In summary, the ShakeOut Scenario estimates this earthquake will cause over 1,800 deaths, 50,000 injuries, $200 billion in damage and other losses, and severe, long-lasting disruption.