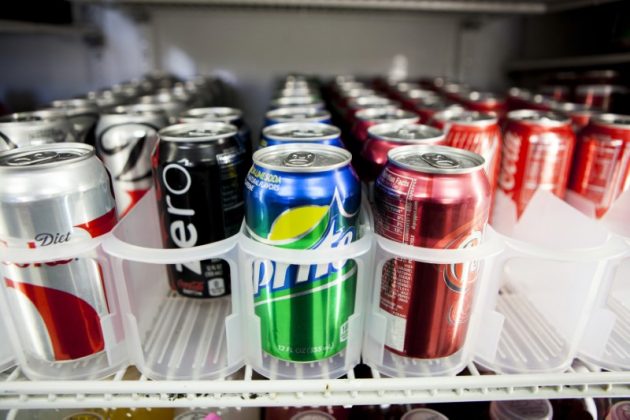 Cans of soda are displayed in a case at Kwik Stops Liquor in San Diego, California February 13, 2014. REUTERS/Sam Hodgson

NEW YORK (Reuters) – A California state senator is taking another stab at introducing a law that would require sugary drink manufacturers to put a warning label on their products, the latest effort in the “War on Sugar.”

Officials and public health advocates have heightened their criticism of sugar as a key contributor to health epidemics like obesity and diabetes, and California has become a major battleground in the fight against what they say is excessive sugar consumption.

San Francisco is battling Big Soda in court over a law requiring a warning label on advertisements for sugary drinks, and voters in four Bay Area cities have approved taxes on the products. On Monday, Democratic state Senator Bill Monning for a third time introduced a bill that would place warning labels on soda and other sugar-sweetened beverages sold in California.

Similar bills from Monning failed in 2014 and 2015, but the lawmaker said he sees a rising tide of support.

“Certainly the victories in local communities show a growing awareness of the health risk posed by these drinks,” Monning said by telephone, referring to votes in November in three Bay Area cities approving soda levies. Voters in Berkeley had approved a soda tax in 2014.

“This is not a tax measure. We’re not taking products off the shelves. This is about consumers’ right to know,” he said.

The legislation would require companies like Coca-Cola Co and PepsiCo Inc to put warning labels on beverages sold in California that have added sugars and have 75 or more calories per 12 ounces. The warning would state that drinking beverages with added sugar contributes to obesity, diabetes and tooth decay.

ABA has sued San Francisco to block the city from introducing a warning label on sugar-sweetened beverages. It recently lost a legal challenge to block a soda tax from being rolled out in Philadelphia last month.

Coca-Cola and the ABA have been sued by a nonprofit group for allegedly misleading consumers about the health risks from consuming sugary beverages. That case is in U.S. District Court for the Northern District of California.