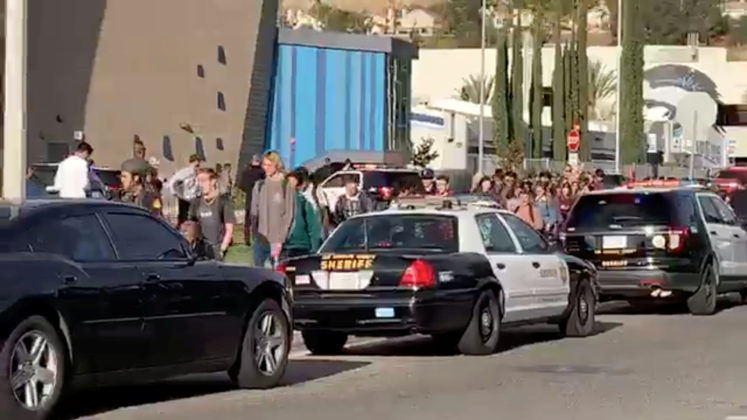 Sheriffs escort students and faculty out of Saugus High School after a shooting at the school, in Santa Clarita, California, U.S., November 14, 2019 in this still image obtained from social media video. KHTS Radio via REUTERS

SANTA CLARITA, Calif. (Reuters) – A 16-year-old student was carrying out a deliberate plan when he shot five teenagers at his California high school then turned the gun on himself, the local sheriff said on Friday, but authorities have no clues about what sparked the bloodshed.

“We did not find any manifesto, any diary that spelled it out,” Los Angeles County Sheriff Alex Villanueva said at a briefing.

The gunman, whose identity has not been made public, survived the self-inflicted gunshot wound but was in grave condition in a hospital, Villanueva said. Two of the other five students who were shot in the Thursday morning attack died of their wounds.

Detectives worked through the night to follow up on tips related to the shooting at Saugus High School in Santa Clarita, about 40 miles (65 km) north of Los Angeles. The shooting, which was caught on video, unfolded in 16 seconds, police said.

Arriving at school on his 16th birthday, the suspect pulled a .45 semi-automatic pistol from his backpack in an outdoor courtyard, stood in one place and shot his victims in rapid succession before turning the gun and firing the last bullet into his head.

Villanueva said authorities did not know the origin of the gun used, nor how the shooter got his hands on it.

All Hart District schools in Santa Clarita were closed on Friday, the Santa Clarita Valley Sheriff’s office said on Twitter, out of respect for the victims and their families.

Two girls aged 14 and 15 were being treated at Providence Holy Cross Medical Center in Mission Hills, California and were listed in good and fair condition, a hospital spokeswoman said early on Friday.

At the Henry Mayo Hospital in Santa Clarita, authorities said a 14-year-old boy was treated and released. Two other students who had been taken there died. A hospital spokesman could not immediately be reached on Friday.

Villanueva identified one of the students killed as Gracie Anne Muehlberger, 15. He said the families of the other student killed and those wounded did not authorize him to release their names.

The scene at Saugus High School was reminiscent of other mass shootings at U.S. schools, including Marjory Stoneman Douglas High School in Parkland, Florida, where a former student with an assault rifle killed 17 people on Feb. 14, 2018.

It was the 85th incident of gunfire at a school this year, according to Everytown, a gun control advocacy group.

One thought on “California police find no motive for school shooting”