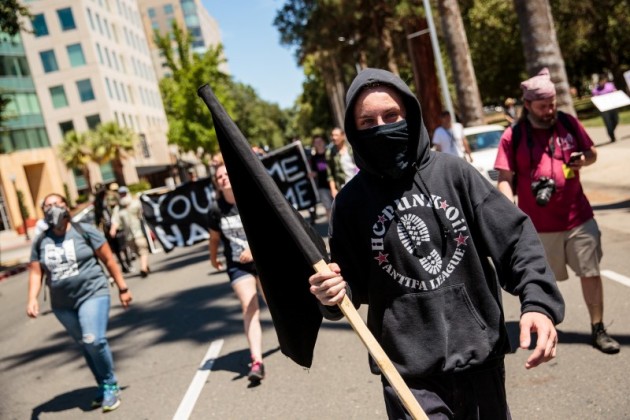 Anti-fascist counter-protestors parade through Sacramento after multiple people were stabbed during a clash between neo-Nazis holding a permitted rally and counter-protestors on Sunday at the state capitol in Sacramento, California, United States, June 26, 2016. REUTERS/Max Whittaker

(Reuters) – At least 10 people were injured at a rally outside the California state capitol in Sacramento on Sunday as members of a white supremacist group clashed with counter-protesters, authorities said.

The melee erupted during a rally staged by the Traditionalist Worker Party, described by the Southern Poverty Law Center as a white nationalist extremist group.

One of its leaders, Matt Parrott, said the party had called the demonstration in part to protest against violence that has broken out outside recent rallies by Donald Trump, the presumptive Republican presidential nominee.

The incident may fuel concerns about the potential for violent protests outside the major party conventions in Cleveland and Philadelphia this summer and in the run-up to the Nov. 8 presidential election.

“With the eyes of the world’s media on both Philadelphia and Cleveland, no doubt there will be significant protests,” said Democratic strategist Steve Schale. “The extreme rhetoric, combined with the nonstop media attention, does encourage these kinds of events.”

In Sacramento, when the white supremacists arrived at the capitol building at about noon on Sunday, “counter-protesters immediately ran in – hundreds of people – and they engaged in a fight,” said George Granada, a spokesman for the Capitol Protection Service division of the California Highway Patrol.

In announcing the counter-protest, a group called Anti-Fascist Action Sacramento said on its website that it had a “moral duty” to deny a platform for “Nazis from all over the West Coast” to voice their views.

“We have a right to self defense. That is why we have to shut them down,” Yvette Felarca, a counter-protester wearing a white bandage on her head, told reporters after the clash.

None of the injuries were life-threatening and there were no immediate reports of arrests, Granada said. The building was placed on lockdown.

Matthew Heimbach, chairman of Traditionalist Worker Party, said his group had expected violence even though it planned a peaceful rally and had a permit.

Representatives of the Sacramento police could not be reached immediately for further comment.

Video footage on social media showed dozens of people, some of them wearing masks and wielding what appeared to be wooden bats, racing across the capitol grounds and attacking others.

Photos on social media showed emergency officials treating a victim on the grass in the area as police officers stood guard.

The melee comes about four months after four people were stabbed during a scuffle between members of the Ku Klux Klan and counter-protesters near a KKK rally in Anaheim, California.

In recent months Trump has blamed “professional agitators” and “thugs” for violence that has broken out at many of the Republican candidate’s rallies.

In Albuquerque, New Mexico, last month, anti-Trump protesters threw rocks and bottles at police officers who responded with pepper spray. A month earlier, some 20 demonstrators were arrested outside a Trump rally in Costa Mesa, California.