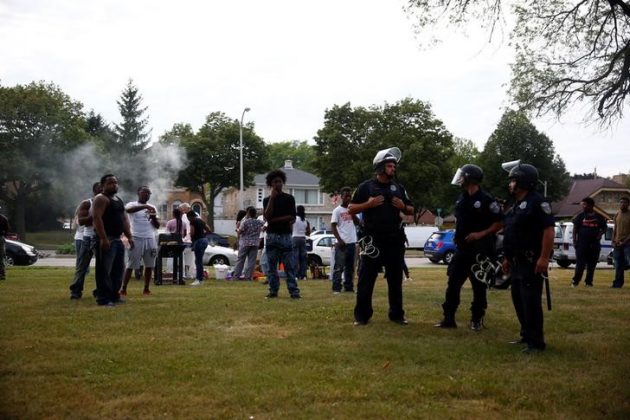 Police and community members stand in a park after disturbances following the police shooting of a man in Milwaukee, Wisconsin, U.S. August 15, 2016. REUTERS/Aaron P. Bernstein

MILWAUKEE (Reuters) – Calls for calm, curfew bring quieter night after Milwaukee riots sparked by the fatal shooting of a black man by a black police officer.

Sylville Smith, 23, was killed on Saturday afternoon after he was stopped for acting suspiciously and then fled. Authorities said he was carrying an illegal handgun and refused orders to drop it when he was shot.

Peaceful demonstrations in the Sherman Park area where Smith died turned into violent protests on Saturday and Sunday nights. Shots were fired, and some rioters torched businesses and police cars. Angry crowds pelted riot police with bottles and bricks.

Eight officers were wounded, and dozens of people were arrested, police said. One person suffered a gunshot wound.

But Monday night was much quieter after a citywide curfew for teenagers took effect at 10 p.m. (0300 GMT). Police said there were six arrests and no reports of major property damage.

“We think we are in, comparatively speaking, a positive place,” Milwaukee Police Chief Ed Flynn told reporters as it became apparent the curfew was being respected. “We had folks from the community step forward to take a leadership role in reducing tensions.”

Milwaukee has become the latest U.S. city to be gripped by unrest after high-profile police killings of black men over the past two years. Many of the officers involved in the earlier shootings were white, however, and the victims were unarmed.

The city will become a focus of the U.S. presidential race later on Tuesday. Republican nominee Donald Trump plans to visit and film a town hall meeting with Fox News host Sean Hannity, raising the possibility of protests similar to those that have taken place outside some of the candidate’s campaign events elsewhere.

Famed for its breweries, Milwaukee is one of the most racially divided U.S. cities, with a black population plagued with high levels of unemployment that are absent in the mostly white suburbs.

Mayor Tom Barrett said on Monday that nightly curfews on teenagers would remain in place “for as long as necessary”.

Barrett has urged state officials to release a video of Smith’s shooting as soon as possible in hopes that, by corroborating the police department’s account, it would convince protesters that the use of deadly force was justified.

Barrett said he had not seen the video. Wisconsin state law requires police shootings be investigated by an independent state agency, which controls such evidence.

Flynn said on Sunday that the body camera video showed Smith was holding a gun and had turned toward the officer, and appeared to show that the officer acted within the law.

Because the audio from the video was delayed, the police chief said, it was unclear when the officer fired his weapon.