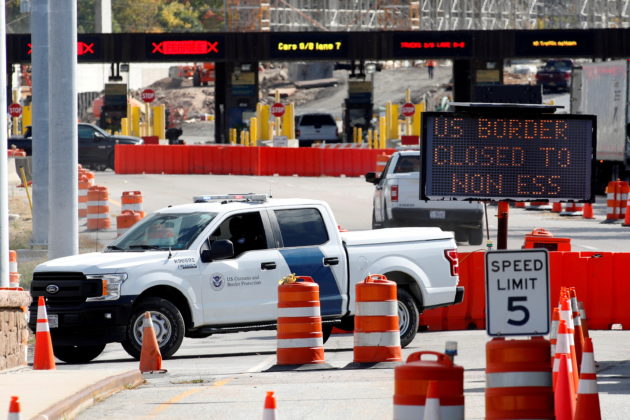 FILE PHOTO: A U.S. Customs and Protection vehicle stands beside a sign reading that the border is closed to non-essential traffic at the Canada-United States border crossing at the Thousand Islands Bridge, to combat the spread of the coronavirus disease (COVID-19) in Lansdowne, Ontario, Canada September 28, 2020. REUTERS/Lars Hagberg/File Photo

VANCOUVER (Reuters) – Canadian border guards and customs officials voted on Tuesday to go on strike just days ahead of the reopening of the border with the United States, unions representing the workers said, after working for three years without a contract.

A strike would slow down commercial traffic at the land border, the unions said, as well as impact international mail and collection of duties and taxes. But a spokesperson for the Canada Border Services Agency (CBSA) said 90% of employees have been identified as “essential” so will continue to work in the event of a strike.

Last week, Canada announced plans to reopen its border to fully vaccinated Americans on Aug. 9, and allowing international travelers starting on Sept. 7. The border has been shut for non-essential travel for more than 16 months because of the coronavirus pandemic.

The Public Service Alliance of Canada (PSAC) and the Customs and Immigration Union (CIU) said in a joint statement that strike action could begin as soon as Aug. 6 after 8,500 members voted in favor of the action. Contract talks reached an impasse in December 2020, the unions said.

CBSA spokesperson Judith Gadbois said officers have proven their resilience since the beginning of the pandemic by helping to prevent the spread of the virus and its variants.

“We expect that our officers will continue to fulfill their duties with the highest level of integrity and professionalism.”