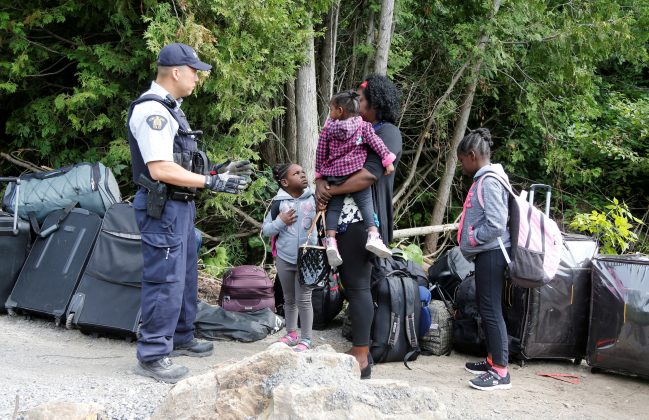 FILE PHOTO: A family who identified themselves as being from Hait, are confronted by a Royal Canadian Mounted Police (RCMP) officer as they try to enter into Canada from Roxham Road in Champlain, New York, U.S., August 7, 2017. REUTERS/Christinne Muschi/File Photo 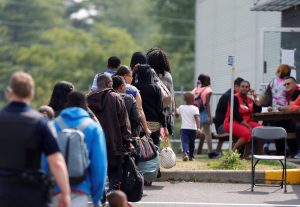 FILE PHOTO: A group of asylum seekers wait to be processed after being escorted from their tent encampment to the Canada Border Services in Lacolle, Quebec, Canada, August 11, 2017. REUTERS/Christinne Muschi/File Photo

The Immigration and Refugee Board said on Tuesday it has received no directives or guidance on how to deal with these border crossers.

The government’s “first priority remains the safety and security of Canadians and the integrity of our immigration system,” a spokesman for Immigration and Refugee Minister Ahmed Hussen said in an email.

The wave of border crossings started up in January 2017 and ramped up over the summer as many Haitian immigrants in the United States who were at risk of losing their temporary legal status streamed into Canada on expectations they could find a safe haven. In the months since, thousands of Nigerians have made the same crossing.

More than 27,000 asylum seekers have walked across the Canada-U.S. border since President Donald Trump took office, some of whom have told Reuters they left the United States because of Trump’s policies and anti-immigrant rhetoric.

Trudeau’s government has sought to stem the influx by amending a U.S.-Canadian border pact that turns back asylum seekers at border crossings, but allows immigrants who enter the country outside of an official border crossing to apply for refugee status.

Canada sent its immigration and refugee minister to Nigeria, asking the Nigerian government to help discourage its citizens from crossing into Canada, and asking the United States to deny visas to people who might then go to Canada.

Immigration and Refugee Board data shows that while only a small number of border-crosser claims have been processed, acceptance rates are down for all groups seeking refugee status. The success rate is especially low for Haitians and Nigerians, with overall acceptance rates of 9 percent and 33.5 percent, respectively.

Graphic on the impact asylum seekers are having in Canada: tmsnrt.rs/2HCp4aD