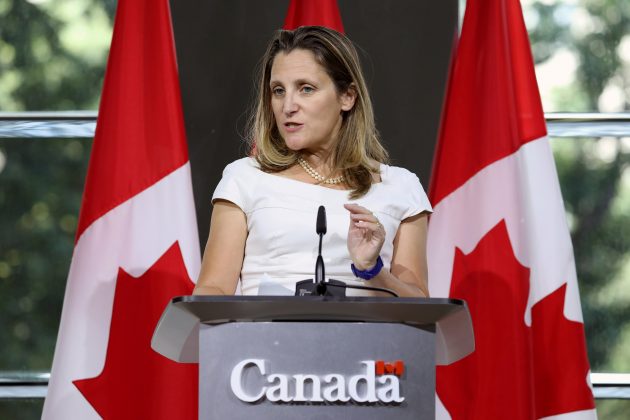 WASHINGTON (Reuters) – Canada is increasingly optimistic it can reach a deal with the United States to salvage the North American Free Trade Agreement, although it may take until the end of September, a source with direct knowledge of the talks said on Friday.

U.S. and Canadian officials resumed their negotiations this week to modernize the 1994 pact, which governs $1.2 trillion a year in trade between the United States, Canada and Mexico and supports hundreds of thousands of jobs.

President Donald Trump has struck a trade deal with Mexico and threatened to push ahead without Canada, a move that would kill NAFTA.

The Canadian source, who declined to be named given the sensitivity of the situation, said Canadian negotiators thought it was quite possible the talks would continue until the end of this month.

A U.S. official told Reuters on Thursday that Canada needed to move further on dairy. In its recent trade deal with the European Union, Canada made concessions on dairy imports.

“We’re down to three issues: Chapter 19, the cultural issues and dairy. We’ve created leverage and driven Canada to the table,” the U.S. official said. “Part of our problem is that Canada has been backsliding on its commitments (on dairy).”

Trump has targeted what he sees as “unfair” trade as part of his “America First” agenda to boost U.S. manufacturing and jobs, imposing tariffs on trading partners, including Canada, China, the EU and Mexico. That has prompted retaliation.

Tens of billions of dollars in Chinese imports have been slapped with U.S. tariffs and a new round of duties are due to be triggered soon.

Both Canada and Mexico want Trump to agree to permanently exempt them from U.S. tariffs on steel and aluminum imports. Washington has used those tariffs as leverage in the NAFTA talks.

Canada has used the provisions of NAFTA’s dispute resolution mechanism to defend its lumber exports to the United States. Washington charges that Canadian lumber unfairly undercuts prices on U.S. lumber.

Trump appeared to set a deadline for a deal this week, prompting aides to U.S. Trade Representative Robert Lighthizer and Canadian Foreign Minister Chrystia Freeland to work well into the evening on Thursday to find ways to move forward.

The Republican chairman of the U.S. House of Representatives Ways and Means Committee, Kevin Brady, a powerful voice in Congress on trade, told reporters differences remained between the two sides over Canada’s dairy quota regime, a trade dispute resolution settlement procedure and “other longstanding issues.”

“My sense is that everyone is at the table with the intention of working these last, always difficult issues out,” Brady told reporters after speaking with Lighthizer on Thursday.

Trump has notified Congress he intends to sign the trade deal reached last week with Mexico by the end of November, and officials said the text would be published by around Oct. 1.

Negotiators have blown through several deadlines since the talks started in August 2017. As the process grinds on, some in Washington insist Trump cannot pull out of NAFTA without the approval of Congress.