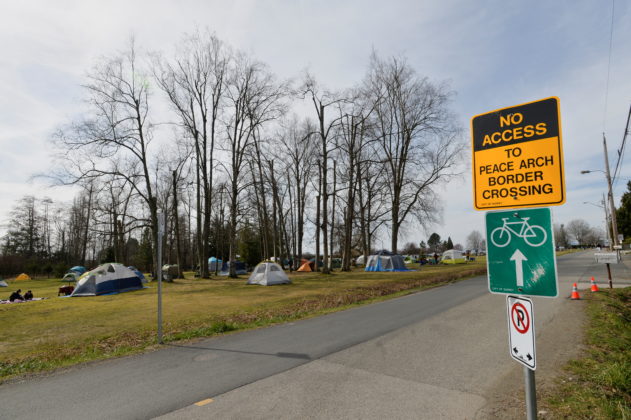 FILE PHOTO: Peace Arch Park, one of the few places where families can gather due to the coronavirus disease (COVID-19) border restrictions, is seen in Surrey, British Columbia, Canada March 13, 2021. REUTERS/Jennifer Gauthier

OTTAWA (Reuters) -Canada is poised to outline a process to ease border restrictions for fully vaccinated citizens and to get rid of its hotel quarantine for returning air travelers as soon as July, a source familiar with the matter said on Wednesday.

Canada’s air and land borders have allowed for only essential travel since March of last year, and Canadians coming home are currently required to quarantine for 14 days. If they fly home, they also must quarantine in a designated hotel until they receive a negative COVID-19 test.

Fully vaccinated Canadians and permanent residents coming home will no longer be required to quarantine for 14 days, nor endure a hotel quarantine, once 75% of the eligible population has received a single dose of a COVID-19 vaccine, and 20% has had a second dose, said the source who asked not to be identified.

However, even fully vaccinated travelers will be required to take a COVID-19 test upon arrival and quarantine until they receive a negative result, the source said.

There will be as many as seven steps before borders are completely opened when 75% of the population is fully vaccinated, the source said. It is still unclear when the rules might change for foreign travelers as there were few details on subsequent steps.

Canadian businesses, and especially airlines and those that depend on tourism, have been lobbying furiously for the government to relax restrictions as more and more people are vaccinated. Some 63% of eligible Canadians have received a first shot, while 8.5% have got a second one.

Canada will have enough vaccines to reach that 75%/20% vaccination threshold by June 21, said Trevor Tombe, an economic professor at the University of Calgary who tracks scheduled deliveries of vaccines.

However, the supply will then need to be distributed and administered, and two weeks should pass to allow immunity from the first shots to take effect, so Canada could reach that goal in mid-July, Tombe said.

News of the plan to ease restrictions was first reported by the Canadian Broadcasting Corp’s Katie Simpson on Twitter, who said the announcement would be made later on Wednesday. French-language public broadcaster Radio-Canada had earlier reported the hotel quarantine would be scrapped.

Canada’s Ministry of Public Safety, which is in charge of border security, did not immediately respond for comment.

(Reporting by Steve SchererEditing by Chizu Nomiyama and Bill Berkrot)