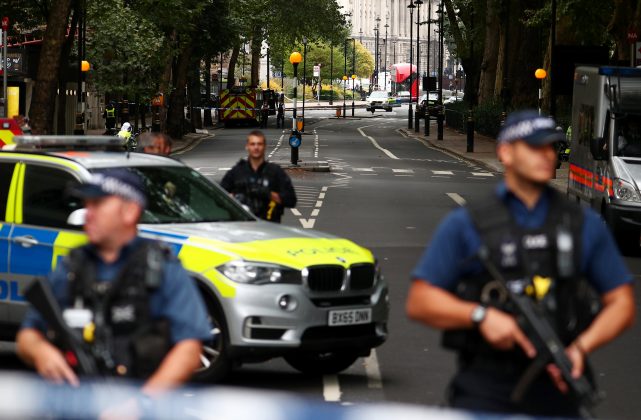 Armed police officers stand at a cordon after a car crashed outside the Houses of Parliament in Westminster, London, Britain, August 14, 2018. REUTERS/Hannah McKay

By Kylie MacLellan and Hannah McKay

LONDON (Reuters) – A man deliberately drove a car into London pedestrians and cyclists on Tuesday before ramming it into barriers outside Britain’s parliament in what appeared to be the second terrorist attack at the building in just under 18 months, police said.

Three people were injured. The driver, a man in his 20s, was arrested by armed officers moments later. He was not cooperating with detectives, the British police counter-terrorism chief said.

“Given that this appears to be a deliberate act, the method, and this being an iconic site, we are treating it as a terrorist incident,” the officer, London Assistant Commissioner Neil Basu, told reporters.

In March 2017, Khalid Masood, 52, killed four people on nearby Westminster Bridge and stabbed an unarmed police officer to death in the grounds of parliament before being shot dead.

It was the first of five attacks in Britain last year that police designated as terrorism, three of which used vehicles as weapons.

Basu said the suspect in Tuesday’s incident was in custody but not cooperating. He said the man had not been formally identified but was not believed to be known to security forces.

The BBC, citing unnamed sources, said the man was from the Birmingham area and known to police, although not to intelligence or counter-terrorism agencies. 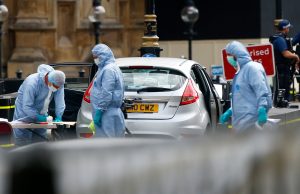 Forensic investigators work at the site after a car crashed outside the Houses of Parliament in Westminster, London, Britain, August 14, 2018. REUTERS/Henry Nicholls

Basu said there were currently no other suspects from the scene of the incident and no indications of further danger.

Police said a silver Ford Fiesta had driven through a group of cyclists and pedestrians during the morning rush hour before hitting a barrier in front of the Houses of Parliament at 7:37 a.m. (0637 GMT).

Video footage showed the vehicle making an illegal turn before veering across the road and into a security lane leading to parliament before smashing into the protective barrier as two police officers jumped to safety.

The man was detained on suspicion of terrorist offenses and no weapons were found, Basu said.

Two people were taken to the hospital and one woman was still receiving treatment for serious but not life-threatening injuries.

Armed officers swarmed the scene and sealed off a large area around parliament that is usually bustling with tourists and government workers.

“I saw the cyclists, injured cyclists. I don’t know if he’s hit these people or if they’ve just dived to escape,” bystander Jason Williams told reporters. “It didn’t swerve, there was not another car going behind him. It looked like it was planned.”

Images shot by a Euronews journalist showed police pointing their guns at the vehicle shortly after the crash. Footage on social media showed a man being led away in handcuffs.

Prime Minister Theresa May, who like other lawmakers is on holiday during parliament’s summer recess, urged Britons to remain vigilant but to carry on as normal.

“For the second time in as many years the home of our democracy, which is a potent symbol of our precious values of tolerance and freedom, has just witnessed terrible scenes just yards from its door,” she said in a statement.

Britain is on its second-highest threat level, “severe”, meaning an attack is considered highly likely.

May’s spokesman said that, since Masood’s attack in Westminster last year, 13 Islamist and four far-right plots had been foiled. At the end of June, security services were carrying out 676 live investigations.

U.S. President Donald Trump, who has previously spoken out about security issues in London, tweeted: “These animals are crazy and must be dealt with through toughness and strength.”

Cordons around parliament began to be lifted about six hours after the incident and Westminster Underground station, close to parliament, was reopened. However, streets immediately surrounding the scene remained closed off.