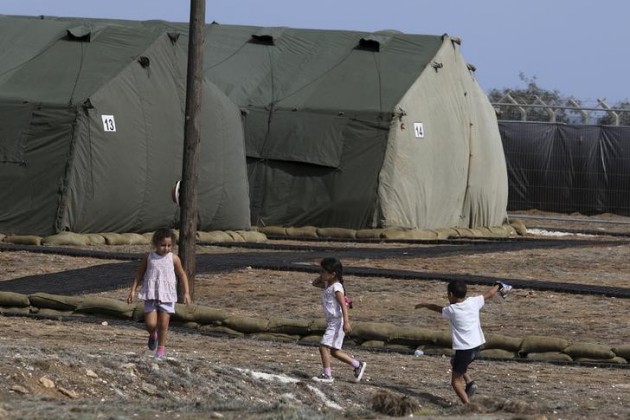 Refugees and migrants children interact with each other at a temporary transit facility at the British sovereign base of Dhekelia in Cyprus, October 28, 2015.REUTERS/Yiannis Kourtoglou

LONDON (Thomson Reuters Foundation) – Celebrities, athletes and pop stars have urged the British government to do more to reunite unaccompanied refugee children with their families in Britain.

Launching a campaign by the United Nations children’s agency (UNICEF) on Friday, tennis champion Andy Murray and actor Roger Moore were among celebrities calling on the government to take in more lone children stranded at migrant camps across Europe.

According to UNICEF, tens of thousands of unaccompanied refugee children are stranded in Europe, even though many of them have relatives living in Britain.

“For these children the chance to be reunited with their family in the U.K. could be life-changing and (would) make sure they’re kept safe from violence, exploitation and abuse,” said Murray.

Olympic cycling gold medalist Chris Hoy said: “There are unaccompanied refugee children in Europe risking their lives to reach relatives in the UK despite having the legal right to be brought here safely. The government must do more to reunite [them].”

In one case cited by UNICEF, a 16-year-old refugee boy referred to as Bilal had left Syria when he was 14 to join his brother in London, and had had to travel alone for more than a year before the pair were reunited.

“When I made it to France, I had to wait in the Calais Jungle for seven months and it was a living hell,” Bilal was quoted as saying.

“I saw people die trying to escape. I saw people beaten to death in the camp… I want people like me, who have family in the UK, to come here and be safe. It is taking too long and too many children are suffering,” he said.

Prime Minister David Cameron has said that children fleeing the conflict in Syria are “relatively safe” once they reach Europe and that the government does not want to encourage more Syrians, including unaccompanied children, to attempt the hazardous journey to the West.

In April the Home Office (Interior Ministry) said that up to 3,000 Syrian and other child refugees from camps in the Middle East and North Africa are to be resettled in Britain over the next four years.

UNICEF said that if the Home Office had 10 more officials working to reunite families, all 157 lone children at the Calais camp who have relatives in Britain could be living with their families by September.