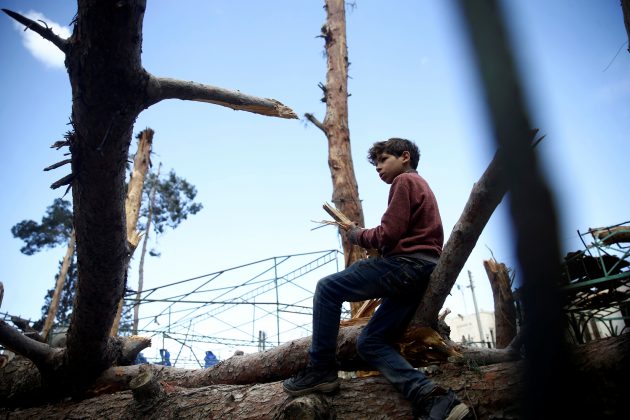 EASTERN GHOUTA, Syria/BEIRUT (Reuters) – Syrian Abu Alma has holed up in a basement for two weeks with his wife and baby daughter. Ten other families stay with them, hiding from the bombs that fall on Syria’s eastern Ghouta.

They only venture out to find medicine or bring food they had stored at home months earlier, he said.

“We are living in the basement always,” said Abu Alma, 30, an engineer and local aid worker. “We’re trying to make it work. What can we do?”

Warplanes and artillery have battered the rebel enclave near the capital Damascus for over two weeks in one of the bloodiest assaults of the seven-year war. The bombing has killed hundreds and pushed people into makeshift underground shelters.

Syrian government forces have chewed off bits of farmland and marched into towns, squeezing the pocket in the eastern suburbs of Damascus.

As the battles creep closer, thousands of families fled their homes and moved deeper into the enclave, residents say. The cellars were already packed before that.

Russia, the Syrian government’s key ally, has offered insurgents safe passage out. The proposal echoes evacuations in other parts of Syria, where fighters and civilians withdrew to rebel territory near the Turkish border.

Such deals – accept state rule or leave – have helped President Bashar al-Assad’s military claw back control of major cities, with support from Russia and Iran.

Some in eastern Ghouta said they dreaded a similar fate.

“There’s a lot of fear that the regime will enter, and on the other hand people don’t want to leave. They want to stay in their homes,” Abu Alma said in the town of Douma. “It’s harsh in the basements, but it will be much harder in the camps.”

“WE RAN IN THE NIGHT”

Since 2013, troops have encircled eastern Ghouta, where the United Nations estimates 400,000 people live without enough food, water, or medicine. It remains the only big rebel enclave near Damascus, the seat of Assad’s power.

Khalil Aybour, a member of the local opposition council, said more than 16,000 people arrived in Douma alone in two weeks. He has prepared an emergency kit in case he has to suddenly run.

“There are families displaced five times, like my parents,” he said. “People are having to open up their shelters.”

Abu Firas, a farmer from the village of Shifouniyeh, escaped to Douma last week when the front lines reached his house.

“The forces advanced into the farms…We lifted the kids and ran in the night…We don’t even have clothes,” he said. “The warplanes and rocket launchers pounced. The bullets were reaching our building.”

With their three children, he and his wife also live in a basement. “It’s disgusting,” Abu Firas added. “We want to return home…We have our lands. We abandoned them, our cows, our sheep.” The army now controls the village.

Moscow and Damascus say their forces only target armed militants and seek to stop mortar salvoes by Islamist insurgents that have killed dozens of people in the capital.

Russian and Syrian forces have opened corridors for civilians to exit the suburbs. But there are no signs that anyone has, and they accuse the Ghouta insurgents of preventing residents from leaving. The two main factions deny this.

Abu Alma said people do not trust the route and worry about an uncertain fate if they go to government territory. “Because there are no guarantees except from the Russians and the regime, and they are the same ones bombing Ghouta.”

To pass the time in the cellar, they read the news or try to check on the status of relatives, he said. 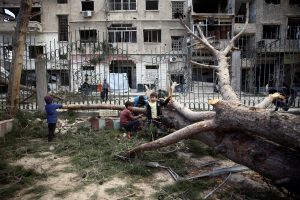 Some people said they did not doubt that a small part of the population wanted to get out, at least for survival.

One resident in Douma said that many now wanted the bombs to stop falling at any price. Their despair has grown and the government onslaught has intensified so much that they now resent the insurgents, the resident said.

Ahmad al-Meshrif, an ex-rebel, left his town of Nashabiyeh with 14 relatives including his mother, wife and son. Air strikes followed them as they moved across towns over the course of two weeks, he said.

“This latest attack…has not spared anything. If only you see the sheep and the cows in the streets, how the shrapnel tore them to pieces.”

When his family stayed in a shelter in Mesraba, he said, they could barely step out to the water pump because of the shelling. “That’s aside from the psychological state they put us in. I cannot find the words to describe it.”

Meshrif, 35, has taken care of his nephews and nieces since two of his brothers died fighting against the army in recent years. His third brother was in a government prison.

“We can no longer bear it. We put our hope in God,” he said. “I would rather die a million deaths than live under (the state’s) control and stop battling it – impossible.”