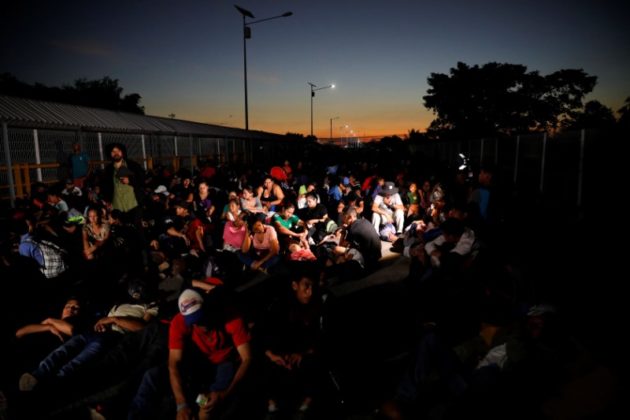 Migrants, part of a caravan travelling to the U.S., gather near the border between Guatemala and Mexico, in Tecun Uman, Guatemala, January 20, 2020. REUTERS/Jose Cabezas

SUCHIATE RIVER, Guatemala/Mexico (Reuters) – Hundreds of Central Americans waded across a river into Mexico on Monday, some clashing with waiting security forces, in a new challenge for President Andres Manuel Lopez Obrador’s efforts to contain migration at the bidding of the United States.

Scattered groups launched rocks at a few members of Mexico’s National Guard who were on the banks of the river attempting to thwart any illegal crossings, as hundreds of others ran past into Mexico, video footage of the scene showed.

The mostly Honduran migrants appeared to grow impatient on the bridge over the Suchiate River that connects the two countries, after some were denied permission to cross by assembled Mexican migration officials.

“We didn’t come to stay here, we just want to cross to the other side,” said Ingrid, 18, a Honduran migrant. “I don’t want to go back to my country because there is nothing there, just hunger.”

U.S. President Donald Trump has threatened to punish Mexico and Central American countries economically if they fail to curb migrant flows, resulting in a series of agreements aimed at taking pressure off the United States in absorbing the numbers.

At least 2,000 migrants had been camped in the Guatemalan border town of Tecun Uman, opposite Ciudad Hidalgo on the Mexican side.

Mexico has offered migrants work in the south, but those who do not accept it or seek asylum will not be issued safe conduct passes to the United States, and most will be deported, the interior ministry said.

The ministry said in a statement on Sunday that Mexican authorities had already received nearly 1,100 migrants in the states of Chiapas and Tabasco and set out various options to them in accordance with their migration status.

“However, in the majority of cases, once the particular migration situation has been reviewed, assisted returns will be carried out to their countries of origin, assuming that their situation warrants it,” the ministry said.

According to Guatemala, at least 4,000 people entered from Honduras since Wednesday, making for one of the biggest surges since three Central American governments signed agreements with the Trump administration obliging them to assume more of the responsibility for dealing with migrants.

In late 2018, a large caravan of migrants sought to break through the Tecun Uman border. At that time as well, many crossed via the Suchiate River dividing the two countries.