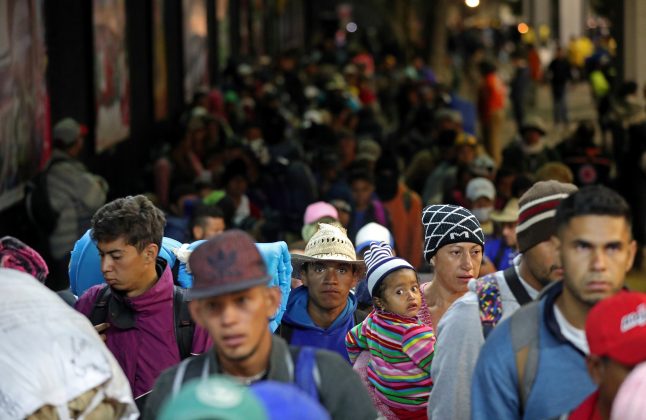 Migrants, part of a caravan of thousands traveling from Central America en route to the United States, make their way to Queretaro from Mexico City, Mexico, November 10, 2018. REUTERS/Hannah McKay

QUERETARO, Mexico (Reuters) – Hundreds of Central American migrants resumed their march north through Mexico on Saturday, en route to the U.S. border where President Donald Trump has effectively suspended the granting of asylum to migrants who cross illegally.

Trump’s Friday order, which went into effect on Saturday, means that migrants will have to present themselves at U.S. ports of entry to qualify for asylum and follow other rules unveiled on Thursday that seek to limit asylum claims.

“It doesn’t matter what rules (Trump’s) government imposes we cannot go back to our countries. I have a bullet in my arm and another in my shoulder. If I go back home, it’d be better for me to go with a casket,” said 30-year-old Julio Caesar from Honduras, who declined to give his last name.

The caravan, made up mostly of Hondurans, started north again on Saturday morning following a rest of four days in Mexico City.

They carried backpacks, blankets, food, many with children in tow, and took the metro and then walked to the town of Tepotzotlan. There they were helped onto buses and trucks by authorities, who stopped traffic to ask motorists if they would take the migrants to the city of Queretaro, where a shelter was set up at a stadium.

Some of the migrants are set to arrive at the border city of Tijuana on Monday, while others later in the week to Reynosa and other border towns, according to migrant shelters.

“These (U.S.) policies leave migrants even more vulnerable because they will be stranded in northern Mexico, with human traffickers lurking because the Mexican government does not have the capacity to help them,” said Oscar Misael Hernandez, researcher at the Colegio de la Frontera Norte.

Trump made his hard-line policies toward immigration a key issue ahead of Tuesday’s midterm elections. He has vowed to deploy troops at the border to stop a caravan of migrants, who say they want to seek asylum in the United States, citing violence in their own countries.