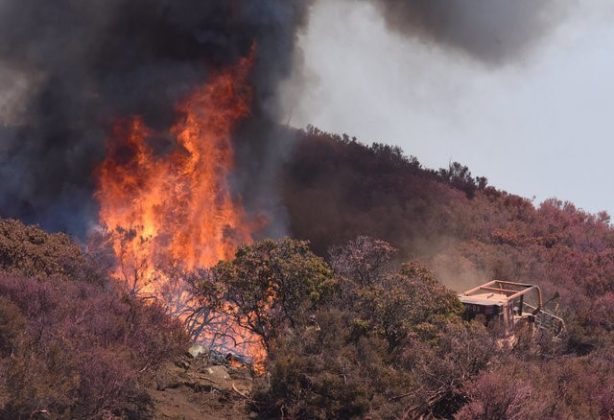 (Reuters) – A damaging wildfire burning on California’s scenic central coast was expected to continue burning into Monday, after fire fighters made progress on Sunday in containing the blaze which has destroyed 16 homes.

By Sunday evening the so-called Whittier Fire burning near Santa Barbara was 49 percent contained, an improvement from earlier in the day and nearing Friday’s 50 percent containment, the California Department of Forestry and Fire Protection, or Cal Fire, said.

Forecasters said that while temperatures and humidity trends would remain fairly constant, some cooling was expected due to onshore winds along the fire’s coastal sections.

California Gov. Jerry Brown declared a state of emergency in Santa Barbara County due to the Whittier and Alamo fires burning there.

Cal Fire bumped up the number of dwellings to 16 destroyed and one damaged by the Whittier fire after getting a closer look at the affected area. Most of them were burned in the early hours of the fire, which started on July 8.

The fire grew on Friday evening when so-called “sundowner” offshore winds picked up, pushing it into dry brush that has not burned since 1955, Cal Fire said.

An evacuation shelter is open at a high school in Goleta, near Santa Barbara.

In the area of the fire, Sunday temperatures pushed 100 degrees Fahrenheit (38 Celsius) with humidity low at about 10 to 15 percent.

The Whittier Fire is among more than 50 large, active wildfires burning across the U.S. West as forecasters warned that hot, dry conditions could persist, creating tinderbox conditions.

Flames have charred more than twice as much land in California so far in 2017 compared with the same time last year, according to Cal Fire.