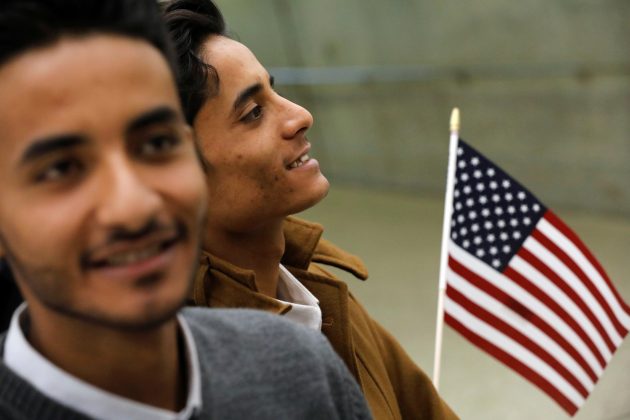 Tareq Aziz (L) and his brother Ammar Aziz (2nd L), Yemeni nationals who were delayed entry into the U.S. because of the recent travel ban, smile as they are reunited with their family at Washington Dulles International Airport. REUTERS/Jonathan Ernst

SAN FRANCISCO (Reuters) – The most consequential legal challenge to U.S. President Donald Trump’s travel ban will proceed on two tracks in the next few days, including a U.S. appeals court vote that could reveal some judges who disagree with their colleagues on the bench and support the arguments behind the new president’s most controversial executive order.

In a Seattle federal courtroom, the state of Washington will attempt to probe the president’s motive in drafting his Jan. 27 order, while in the 9th U.S. Circuit Court of Appeals, judges will decide whether to reconsider an appeal in that same case decided last week.

Trump’s directive, which he said was necessary to protect the United States from attacks by Islamist militants, barred people from Iran, Iraq, Libya, Somalia, Sudan, Syria and Yemen from entering the country for 90 days. Refugees were banned for 120 days, except those from Syria, who were banned indefinitely.

The ban was backed by around half of Americans, according to a Reuters/Ipsos poll, but triggered protests across the country and caused chaos at some U.S. and overseas airports.

U.S. District Judge James Robart in Seattle suspended the order after its legality was challenged by Washington state, eliciting a barrage of angry Twitter messages from Trump against the judge and the court system. That ruling was upheld by a three-judge panel at the 9th U.S. Circuit Court of Appeals in San Francisco last week, raising questions about Trump’s next step.

At a Seattle court hearing on Monday, Robart said he would move forward with discovery in the case, meaning the request and exchange of information pertinent to the case between the opposing parties.

Meanwhile, an unidentified judge on the 9th Circuit last week requested that the court’s 25 full-time judges vote on whether the temporary restraining order imposed on Trump’s travel ban should be reconsidered by an 11-judge panel, known as en banc review. The 9th Circuit asked both sides to file briefs by Thursday.

Since judges appointed by Democrats hold an 18-7 edge on the 9th Circuit, legal experts say it is unlikely a majority will disagree with the court’s earlier ruling and want it reconsidered.

Arthur Hellman, a professor at the University of Pittsburgh School of Law who has studied the 9th Circuit, noted that one of the three judges who issued the original ruling was appointed by George W. Bush.

Even if the en banc vote fails, however, judges on the 9th Circuit who disagree with last week’s ruling will be able to publicly express their disagreement in court filings, which could help create a record bolstering Trump’s position.

Meanwhile, the government has signaled that it is considering issuing a new executive order to replace the original one. In that case, it could tell the 9th Circuit later this week that it does not want en banc review, because the case would be moot.

“You would think Jeff Sessions would do whatever he had to do to get this case ended as soon as possible,” Hellman said, referring to the recently appointed U.S. attorney general.