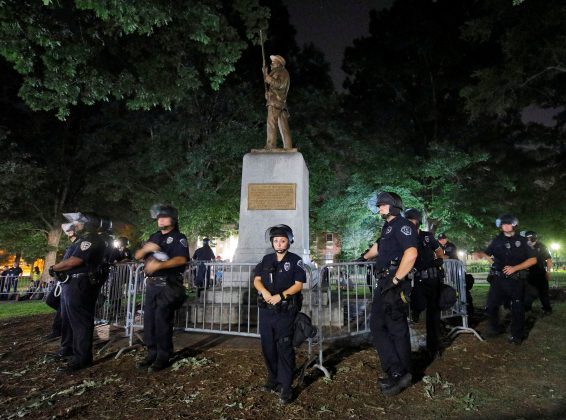 Police wearing riot gear guard a statue of a Confederate soldier nicknamed Silent Sam on the campus of the University of North Carolina during a demonstration for its removal in Chapel Hill, North Carolina, U.S. August 22, 2017. REUTERS/Jonathan Drake

Many activists and local residents crowded into the meeting, which began late Monday and spilled into the wee hours of Tuesday. It was the first council meeting since the Aug. 12 rally, when a car plowed into a group of counter-protesters and killed a 32-year-old woman.

Many at the meeting shouted at the councilors and Mayor Mike Signer, forcing them at one point to leave the chamber.

Videos posted on social media showed some in the crowd yelling “shame” and “shut it down” and calling for Signer’s resignation. A photo online showed two people holding a sign that read “Blood On Your Hands” behind the council seats.

When council members returned to the chamber after spectators were removed, they voted to cover the statues of General Robert E. Lee and Thomas “Stonewall” Jackson, said a city spokeswoman, Paige Rice.

“Council voted unanimously at their meeting to shroud the statues to reflect the city’s mourning,” Rice said.

The planned removal of a statue of Lee in a downtown Charlottesville park had galvanized white nationalists to rally there on Aug. 12 in protest. Charlottesville is home to the University of Virginia.

The rally highlights a persistent debate in the U.S. South over the display of the Confederate battle flag and other symbols of the rebel side in the Civil War, which was fought over the issue of slavery.

In the wake of the Charlottesville rally, other cities have acted to remove monuments to the Confederacy.

On Tuesday night, nearly 1,000 people rallied at the University of North Carolina in Chapel Hill for the removal of “Silent Sam,” a Confederate soldier statue on the campus.

“Hey, hey! Ho, ho! These racist statues got to go!” chanted a crowd that was kept away from the statue by two rings of barricades and police in riot gear.

The protest was largely peaceful, but two people were arrested, said the university’s communications department. No information on the charges levied, or details of the people arrested, were given.

There was no sign of professed white nationalists at the Chapel Hill rally.

In Charlottesville, the council voted to cover the Lee and Jackson statues with black fabric for now because of a pending lawsuit challenging the city’s authority to remove the statue of Lee.

During the council meeting, activists and residents questioned the police response to the Aug. 12 unrest and criticized city leaders for not heeding warnings in advance of the rally, Rice said. She said that three people were removed from the room.

Charlottesville police did not immediately respond to a request for comment. The New York Times reported that the three people ejected from the meeting were issued citations for disorderly conduct.

Signer called last week for a special session of Virginia’s legislature to let localities decide the fate of Confederate monuments such as the Lee statue.

Virginia Governor Terry McAuliffe said that would be redundant because the statue’s fate is already subject to litigation, though he said he hoped the court will rule in the city’s favor.

The night before the Aug. 12 rally, scores of white supremacists descended on Charlottesville and marched with tiki torches through the campus of the University of Virginia in a display that critics called reminiscent of a Ku Klux Klan rally.

In response to the Charlottesville violence, actor George Clooney and his humanitarian lawyer wife, Amal Clooney, have donated $1 million to the Southern Poverty Law Center, a U.S. non-profit that tracks extremist groups. 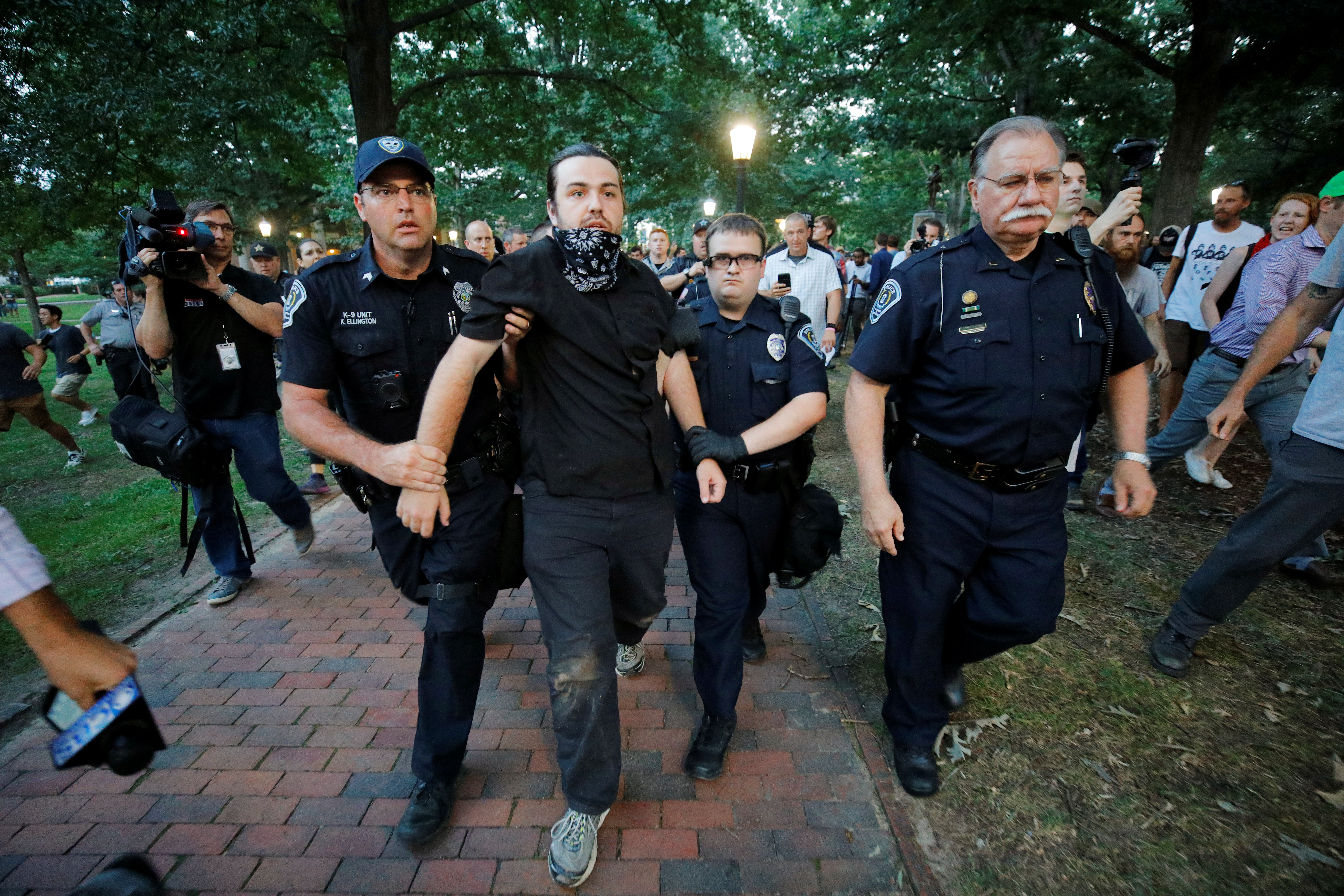 Police detain a demonstrator during a protest against a statue of a Confederate solider nicknamed Silent Sam on the campus of the University of North Carolina in Chapel Hill, North Carolina, U.S. August 22, 2017. REUTERS/Jonathan Drake

3 thoughts on “Charlottesville to cover Confederate statues after chaotic meeting”