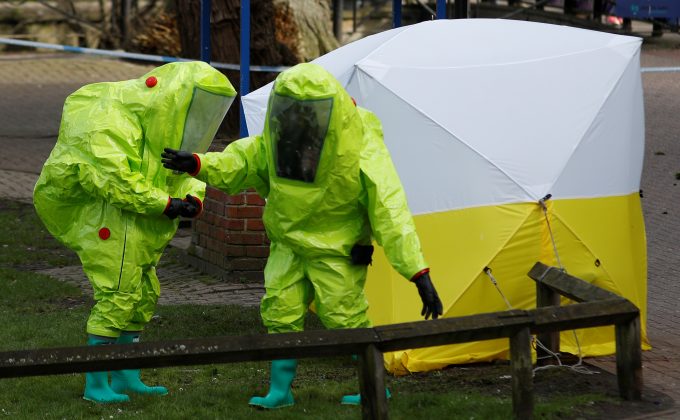 FILE PHOTO: The forensic tent, covering the bench where Sergei Skripal and his daughter Yulia were found, is repositioned by officials in protective suits in the centre of Salisbury, Britain, March 8, 2018. REUTERS/Peter Nicholls

THE HAGUE (Reuters) – The OPCW global chemical weapons watchdog will add Novichok, the Soviet-era nerve agent used in an attack last year in Salisbury, England, to its list of banned toxins after its members adopted a proposal on Monday.

The 41 members of the decision-making body within the Organisation for the Prohibition of Chemical Weapons (OPCW) adopted a joint proposal by the United States, the Netherlands and Canada, member states said.

They agreed “to add two families of highly toxic chemicals (incl. the agent used in Salisbury),” Canada’s ambassador to the agency, Sabine Nolke, said on Twitter.

“Russia dissociated itself from consensus but did not break,” she wrote.

Western allies ordered the biggest expulsion of Russian diplomats since the height of the Cold War in response to the attack on former Russian secret service agent Sergei Skripal and his daughter Yulia in Salisbury in March.

Monday’s OPCW decision was confidential and no other details were released.

It was the first such change to the organization’s so-called scheduled chemicals list, which includes deadly toxins VX, sarin and mustard gas, since it was established under the 1997 Chemical Weapons Convention.

The OPCW’s 193 member countries have 90 days to lodge any objections to Monday’s decision.

The OPCW, once a technical organization operating by consensus, broke along political lines over the use of chemical weapons in Syria, which Russia supports militarily.