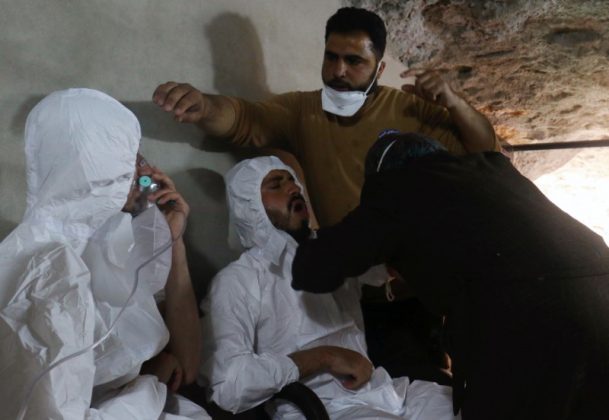 FILE PHOTO: A man breathes through an oxygen mask as another one receives treatments, after what rescue workers described as a suspected gas attack in the town of Khan Sheikhoun in rebel-held Idlib, Syria April 4, 2017. REUTERS/Ammar Abdullah

AMSTERDAM (Reuters) – The world’s chemical weapons watchdog said the banned nerve agent sarin was used in an attack in northern Syria in April that killed dozens of people, a report from a fact-finding team seen by Reuters on Thursday showed.

The report was circulated to members of the Organisation for the Prohibition of Chemical Weapons (OPCW) in The Hague, but was not made public.

The attack on April 4 in the town of Khan Sheikhoun in northern Idlib province was the most deadly in Syria’s civil war in more than three years. It prompted a U.S. missile strike against a Syrian air base which Washington said was used to launch the strike.

After interviewing witnesses and examining samples, a fact- finding mission (FFM) of the OPCW concluded that “a large number of people, some of whom died, were exposed to sarin or a sarin-like substance.

“It is the conclusion of the FFM that such a release can only be determined as the use of sarin, as a chemical weapon,” a summary of the report said.

“Now that we know the undeniable truth, we look forward to an independent investigation to confirm exactly who was responsible for these brutal attacks so we can find justice for the victims,” U.S. Ambassador to the United Nations Nikki Haley said in a statement on Thursday.

A joint United Nations and OPCW investigation, known as the JIM, can now look at the incident to determine who is to blame, she said.

The JIM has found Syrian government forces were responsible for three chlorine gas attacks in 2014 and 2015 and that Islamic State militants used mustard gas.

The mission was unable to visit the site itself due to security concerns and will not attempt to get there, the head of the OPCW was said to have decided.

Syria joined the chemicals weapons convention in 2013 under a Russian-U.S. agreement, averting military intervention under then U.S. President Barack Obama.

The United States said on Wednesday the Syrian government appeared to have heeded a warning this week from Washington not to carry out a chemical weapons attack.

Russia, the Syrian government’s main backer in the civil war, warned it would respond proportionately if the United States took pre-emptive measures against Syrian forces after Washington said on Monday it appeared the Syrian military was preparing to conduct a chemical weapons attack.