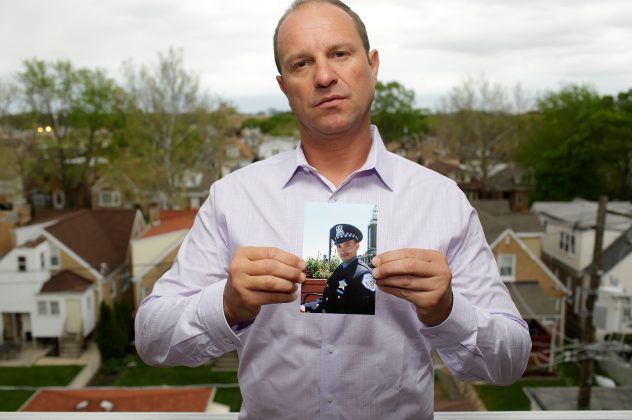 Ark Maciaszek poses with a photo of his cousin, former Chicago police officer and suicide victim Scott Tracz, at his home in Chicago, Illinois, U.S. May 2, 2017. Picture taken May 2, 2017. REUTERS/Joshua Lott

The normally upbeat Tracz, 30, had become withdrawn and sullen, struggling with the violence he witnessed as an officer but rejecting advice from friends and family to seek help, fearing it would end his career, relatives said.

Tracz is believed to be the latest contributor to the Chicago Police Department’s suicide rate, which stands 60 percent higher than the national average according to a recent U.S. Department of Justice report.

Critics say the problem has been exacerbated by a lack of mental health resources. Chicago officials said they are working to improve their mental health services.

The pressure on Chicago’s police officers has intensified as the city has dealt with a surge in murders and increased scrutiny around tactics following the 2015 release of video showing the shooting death of black teenager Laquan McDonald by a white officer.

In 2016, the number of murders in the city jumped nearly 60 percent to over 760, more than New York and Los Angeles combined. There were more than 4,300 shooting victims in the city last year, according to police.

The McDonald video sparked outrage and thrust Chicago into the nationwide debate over police use of force. The subsequent Justice Department report in January found Chicago police routinely violated civil rights, and also cited suicide as a “significant problem” for the city’s officers.

“Chicago is a war zone,” said Alexa James, the executive director of the National Alliance on Mental Illness-Chicago. “They (officers) are seeing the worst day of everybody’s life every day.”

While each case contributing to Chicago’s suicide rate is different, interviews with mental health professionals and legal experts, as well as current and former officers, reveal deep-rooted stigma for those seeking help from its Employee Assistance Program (EAP).

Some officers believe that seeking counseling will result in the loss of their Firearm Owner Identification Card, a requirement to carry a firearm under state law, according to current and former officers, as well as health officials. That view is mistaken, say Justice Department officials.

Still, “If someone thinks I have talked to EAP they think I’m unstable, so I’m not going to call,” said one veteran officer, who asked not to be identified.

Chicago Police Superintendent Eddie Johnson said in February the department’s past approach to mental health was wrong. In a report issued in March, the department said it would review mental wellness support services.

“Law enforcement historically has been seen as a very macho profession,” Johnson said at a public forum about police reform. “To say you needed help was seen as a sign of weakness and we were wrong for looking at it that way, we were simply wrong.”

Tracz had long dreamed of becoming a police officer to help others. But working in the violence-stricken Chicago Lawn district, he came face to face with the city’s violent crime. The area accounted for 58 of the city’s more than 760 murders last year, as well as 228 shootings.

“He would say, ‘You can never imagine what the human race is capable of doing,’ then he would just put his head down,” said his cousin Maciaszek, 46. Tracz’s relationship with his long-time girlfriend also grew strained as he became more irritable and angry, Maciaszek said.

Even if officers like Tracz had sought help they would have found the department’s resources strained. Three clinicians serve roughly 12,500 sworn officers and also their families, providing nearly 7,500 consultations in 2015, the Department of Justice said in its report.

The program is hiring another psychologist, as well as another drug and alcohol counselor, Robert Sobo, the department director of counseling services, said in an interview. In addition, the unit has four officers who serve as substance abuse counselors and a peer support network, he said.

But this would still leave the department lagging other major police cities of similar size. For example, Los Angeles Police has 14 trained psychologists and plans to hire two more for fewer than 10,000 sworn officers.