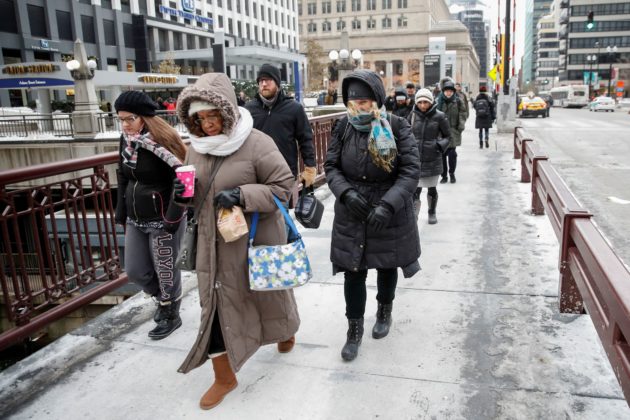 CHICAGO (Reuters) – Homeless advocates in Chicago were closely monitoring wind chill temperatures on Tuesday as an early season blast of arctic air swept across the eastern two-thirds of the United States.

The city of Chicago, where 86,000 homeless people live, opened its six warming shelters over the last few days as unseasonably cold temperatures dipped into the teens with wind chills into the single digits during the morning, according to the National Weather Service (NWS).

“It’s incredibly concerning that we are experiencing this level of cold this early in the season,” said Doug Schenkelberg, director of the Chicago Coalition for the Homeless.

The NWS said the Chicago metro area along with many major cities in the Midwest and East Coast and across the South would experience numerous record lows for a Nov. 12 or 13, with temperatures averaging 20 to 30 degrees below normal.

“It’s significantly earlier than we normally would see a change in the jet stream,” said Ed Shimon, a NWS meteorologist. “We actually have a cold front already blasting down to Florida and off the Gulf Coast … so records are being broken all over the place.”

The bitter cold prompted Cornerstone Community Outreach, on Chicago’s North Side, to place cots in its dining room to accommodate the influx of homeless people a month earlier than it usually does each winter.

“We have seen an uptick of people coming,” said Sandra Ramsey, executive director of Cornerstone Community Outreach. “From the looks of it, it spells out that we will have a long winter.”

Ramsey said she was worried about the homeless people who suffer from mental illness and refuse to go inside, opting to live under viaducts and in alleyways even amid deadly cold.

“It takes time and relationships to get these people … to come in on terribly cold nights,” Ramsey said. “But then they go back out.”

About 16,000 people sleep each night on the Chicago streets and shelters, Schenkelberg said. He added that the key to dealing with homelessness in extreme weather conditions ultimately is finding permanent supportive housing for the homeless.

“It’s never an easy time to be homeless regardless of the weather and when you add extreme weather like this into the mix, it makes life that much more difficult for people experiencing it,” he said.

(Reporting by Brendan O’Brien in Chicago; Editing by Frank McGurty and Tom Brown)