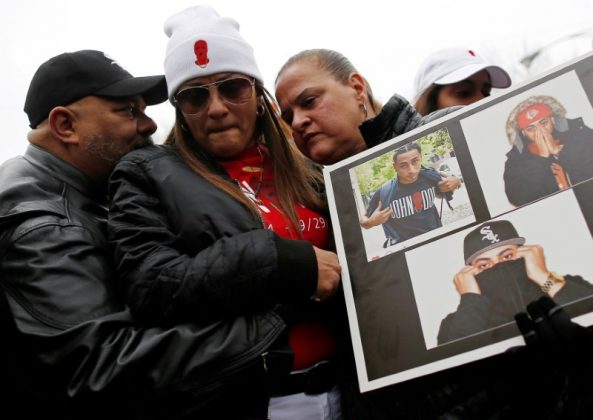 FILE PHOTO - Jacqueline Ortiz (C), is comforted as she cries during a vigil for her son John Ortiz, who was shot and killed while driving on the Eisenhower Expressway in Chicago, Illinois, U.S., December 6, 2016. REUTERS/Jim Young/File Photo

CHICAGO (Reuters) – Jonathan Ortiz and other members of his rap group, No Nights Off, stepped onto the stage at Chicago’s House of Blues in mid-September for a concert they hoped would propel their young, promising careers.

Less than two weeks later, the 22-year-old Ortiz, who forebodingly rapped under the stage name “John Doe,” was fatally shot as he drove on an expressway in Chicago. His girlfriend Alexis Garcia also got a bullet lodged in her back.

Ortiz and Garcia were victims of the 38th shooting on Chicago-area expressways in 2016, a record-high number for a city stung by a murder rate not seen in two decades.

“It is overwhelming that this is the reality in Chicago, that you can drive on the expressway now and get shot at,” said Tanue David, a family support specialist with the outreach group Chicago Survivors, who is working with the Ortiz family.

Officials say gang violence is increasingly spilling over onto Chicago’s expressways, with innocent drivers sometimes caught in the crossfire, while the state police force is shrinking.

The Illinois State Police, which has jurisdiction over the expressways, blamed gang warfare for the increased highway shoot-outs in 2016 that pose “an extreme danger to the motoring public.”

Ortiz was shot on Interstate 290, one of five expressways within city limits where shootings took place.

Ortiz and Garcia were shot on the morning of Sept. 29 while Ortiz drove her SUV not far from his mother’s home.

Chicago police said Ortiz had no criminal record and several family members and friends said he was not affiliated with a gang. He and Garcia met three years ago on the shores of Lake Michigan.

“He was calm, that’s how I knew that God took him fast,” Garcia, who grew up in a suburb of Chicago, said of the moments after Ortiz was shot.

In 2011 and 2012, there were nine shootings on city expressways, according to state police, which had no data prior to that.

The rise in highway shootings came as Chicago suffered a broader surge in violence that saw 762 people murdered in 2016, a 57 percent increase from 2015, and the highest number since 1996.

The number drew the attention of President-elect Donald Trump, who said that Chicago’s mayor must ask for U.S. government help if the city fails to reduce its murder rate. [nL1N1ES0LX]

Chicago police cite a number of factors, including splintering gang structures and police drawing back from confrontation out of fear of increased scrutiny for their actions.

Chicago police Superintendent Eddie Johnson has vehemently blamed lax regulations for gun repeat offenders. “The people committing these crimes think the consequences for their actions are a joke,” he said last month.

But the shooting numbers remained high and arrests were made in only one of last year’s expressway shootings. Uncooperative victims and expansive crime scenes hamper efforts to solve the cases, state police said.

Feuding between Republican Governor Bruce Rauner and Democrats who control the legislature has kept the state without a full operating budget since July 2015. That meant no cadet hires in 2015 and 2016, and 2017 remains in limbo as well, state police said. [nL1N1DF1XU]

State police said the budget impasse had no impact on the force’s work. Governor Rauner’s spokeswoman, Catherine Kelly, declined to comment beyond what state police said.

At a December vigil, friends and family gathered by a roadside memorial of flowers and photos as one of Ortiz’s songs thumped from a nearby sports car.

“Chicago I beg of you … this needs to stop,” Ortiz’s friend Sharee Washington, 29, said. “You are destroying people.”

(Reporting by Timothy Mclaughlin in Chicago; Editing by David Gregorio)