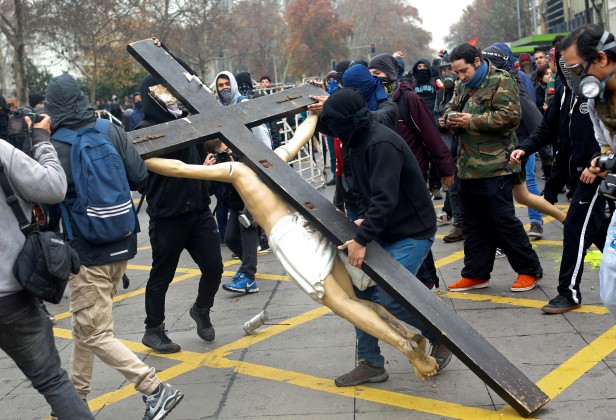 Masked demonstrators carry a cross with Jesus Christ, taken from inside a church, during a protest against government education reforms in Santiago, Chile June 9, 2016. REUTERS/Pablo Sanhueza

SANTIAGO (Reuters) – A student march in Chile’s capital on Thursday ended with violent confrontations with police and the sacking of a Catholic church as the radicalization of the country’s politically powerful student movement intensified.

University and high school students in Chile have become increasingly disenchanted with the left-leaning government of President Michelle Bachelet.

They have accused Bachelet of reneging on a number of promises regarding social and economic reforms, and are incensed over the government’s failure to complete a planned education overhaul, which has been diluted due to budget constraints. They have promised more protests.

At the end of the march on Thursday, masked protesters entered a church in downtown Santiago and destroyed a 3-meter (9.84 ft) tall statue of Jesus Christ.

Gabriel Iturra, spokesman for the student union Confech, said the act was inappropriate and had been committed by a fringe group with little understanding of the movement’s principles.

Chile’s Interior Ministry Mario Fernandez, who took over the post on Wednesday after the prior minister resigned, also condemned the statue’s destruction.

“What we have just seen is a very troubling symptom of what some people are starting to do to our country,” he told reporters.

Student protests, a regular fixture during the last center-right government of Sebastian Pinera, often end in clashes with police. The massive protests have increased in recent weeks, heaping political pressure on Bachelet’s government.

In the last month, students have staged a protest inside the country’s presidential palace and have occupied and paralyzed dozens of universities and high schools throughout the country.