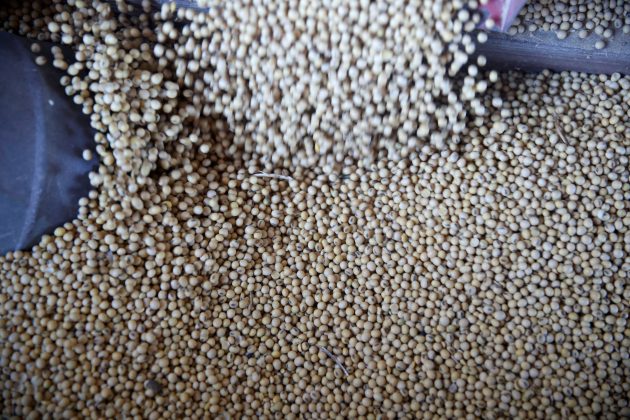 FILE PHOTO: Soybeans fall into a bin as a trailer is filled at a farm in Buda, Illinois, U.S., July 6, 2018. REUTERS/Daniel Acker

CHICAGO (Reuters) – China snapped up a small volume of U.S. soybeans last week after pledging to halt purchases of American farm products due to the escalating trade war between Washington and Beijing, U.S. Department of Agriculture data showed on Thursday.

The world’s largest soybean importer struck deals from Aug. 9 to 15 to buy 9,589 tonnes for delivery in the current marketing year and 66,000 tonnes, approximately one cargo, for the next year, the data showed.

“You do have some buying going on,” said Arlan Suderman, chief commodities economist for INTL FCStone. “It’s a little bit of a surprise.”

China last year imposed retaliatory tariffs that remain in place on imports of U.S. farm products including soybeans and pork. The duties have slashed exports of U.S. crops and prompted the Trump administration to compensate American farmers for losses over two years with as much as $28 billion.

China said on Thursday it hopes the United States will stop a plan to impose new tariffs, adding that any new duties would lead to a further escalation.

China has largely turned to South America for soybeans since the trade war began last year. U.S. soybean sales to China in 2018 dropped 74% from the previous year.

“Compared to what they used to buy, they essentially have halted – but some have gotten through,” Suderman said.

The sales of 9,589 tonnes for delivery in the current marketing year will probably be rolled ahead to be delivered in the next year, which begins on Sept. 1, said Don Roose, president of Iowa-based broker U.S. Commodities.

The cargo sold for delivery in the next marketing year could have been in the works before Beijing said Chinese companies would suspend purchases of U.S. farm goods, said Terry Reilly, senior commodity analyst for Futures International.

“The government may have just given the green light to say, ‘Let this one go through,'” Reilly said.

“One cargo is not going to change the fact that they’re not buying millions of tons of soybeans.”