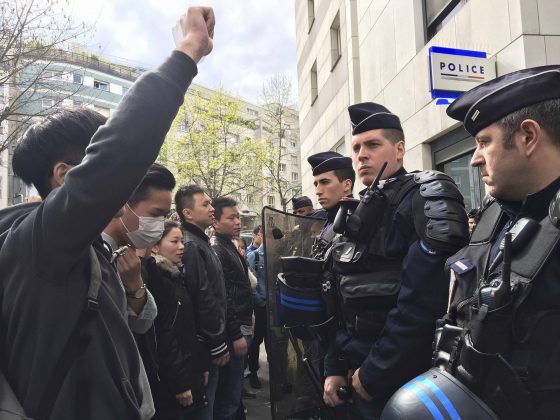 French police face off with members of the Chinese community during a protest demonstration outside a police station in Paris, France, March 28, 2017, after a Chinese man was shot dead by police at his Paris home on Sunday, triggering riots in the French capital by members of the Chinese community and a diplomatic protest by Beijing. REUTERS/Noemie Olive

PARIS/BEIJING (Reuters) – French police said on Tuesday they opened an inquiry after a Chinese man was shot dead by police at his Paris home, triggering rioting in the French capital by members of the Chinese community and a sharp reaction from Beijing.

The shooting on Sunday, which led China’s foreign ministry to call in a French diplomat, brought about a 100 members of the French-Chinese community on to the streets in Paris’s main Chinatown district on Monday night.

Some protesters threw projectiles outside the district’s police headquarters and a number of vehicles were torched in a confrontation with riot police.

Media reports said a 56-year-old man of Chinese origin was shot dead at his home on Sunday night in front of his family after police were called to investigate an altercation with a neighbor.

Police said the man attacked police with scissors, adding that an inquiry had been opened. The man’s family, according to media reports, denied this and some media said he was holding scissors because he had been cutting fish.

Police said they questioned 35 people after Monday’s street protests and three members of the police were treated for slight injuries, they said.

In Beijing, the foreign ministry said on Tuesday it had summoned a French diplomat to explain events. It also sought a thorough investigation by French authorities and steps to be ensure the safety of Chinese citizens in France.

The French foreign ministry said in a statement that an inquiry was under way into the shooting and added that the security of Chinese citizens in France was a priority for the national authorities.

“Additional (security) measures have been taken in recent months and everything has been done to provide them with the best conditions for living here and for their security,” it said.