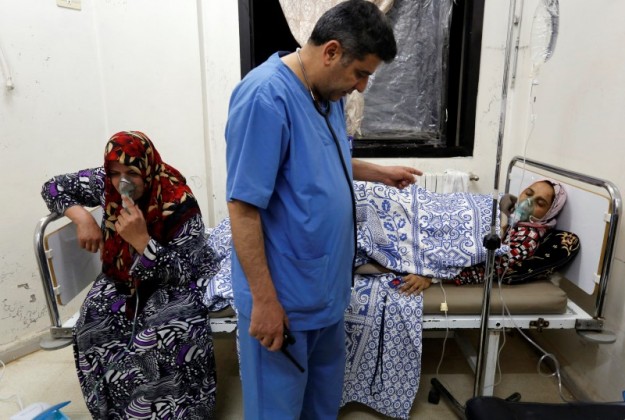 Women, affected by what activists say was a gas attack, receive treatment inside a makeshift hospital in Kfar Zeita village in the central province of Hama May 22, 2014. REUTERS/Badi Khlif

Some diplomats have dismissed the proposed resolution as a bid to distract from accusations the Syrian government uses such weapons.

Russia and China circulated a draft resolution to the 15-member body on Wednesday, which Russian U.N. Ambassador Vitaly Churkin said could serve as a deterrent to “terrorist” groups such as Islamic State from using chemical weapons.

Islamic State militants are believed to be responsible for sulfur mustard gas attacks in Syria and Iraq last year, the United States has said. Russia has also said it sees a high probability that Islamic State is using chemical weapons.

“We also hope all parties on the Security Council can support this Russia-China draft resolution,” Lu told reporters at a regular press briefing.

“We resolutely oppose anyone, for whatever purpose, under any circumstances, using chemical weapons,” Lu said.

The Organization for the Prohibition of Chemical Weapons (OPCW) concluded in a confidential report that at least two people were exposed to sulfur mustard in Marea, north of Aleppo, in August.

The draft resolution, seen by Reuters, would demand that states, particularly those neighboring Syria, “immediately report any actions by non-State actors to develop, acquire, manufacture, possess, transport, transfer, or use chemical weapons and their means of delivery to the Security Council”.

Some council diplomats, speaking on condition of anonymity, said the draft resolution was a ploy by Russia to divert attention from allegations that the Syrian government continued to use chemical weapons. Churkin denied it was a distraction.

Syria agreed to destroy its chemical weapons in 2013 under a deal broker by Moscow and Washington, but the OPCW has since found chlorine has been “systematically and repeatedly” used as a weapon. Government and opposition forces have denied using chlorine.