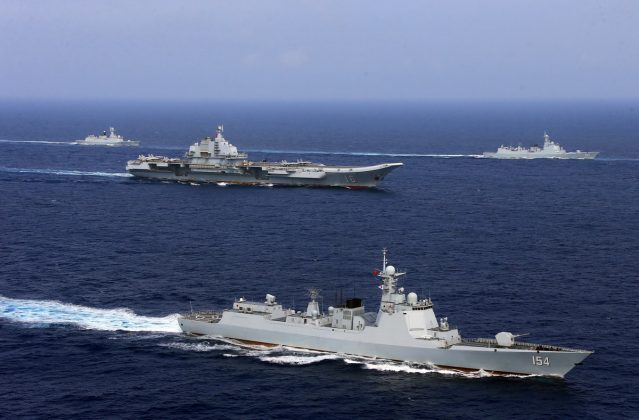 BEIJING/TAIPEI (Reuters) – A series of Chinese drills near Taiwan were designed to send a clear message to the island and China will take further steps if Taiwan independence forces persist in doing as they please, Beijing said on Wednesday, as Taiwan denounced threats of force.

Over the past year or so, China has ramped up military drills around democratic Taiwan, including flying bombers and other military aircraft around the self-ruled island. Last week China drilled in the sensitive Taiwan Strait.

China claims Taiwan as its sacred territory, and its hostility towards the island has grown since the 2016 election as president of Tsai Ing-wen from the pro-independence Democratic Progressive Party.

China has been issuing increasingly strident calls for Taiwan to toe the line, even as Tsai has pledged to maintain the status quo and keep the peace.

Speaking at a regular news briefing, Ma Xiaoguang, spokesman for China’s Taiwan Affairs Office, said the message the People’s Liberation Army was sending with its exercises was “extremely clear”.

“We have the resolute will, full confidence and sufficient ability to foil any form of Taiwan independence separatist plots and moves and to defend the country’s sovereignty and territorial integrity,” Ma said.

“If Taiwan independence forces continue to do as they please, we will take further steps,” he added, without giving details.

The military’s drills were aimed at protecting peace and stability in the Taiwan Strait and the interests of people on both sides of it, Ma said.

In Taipei, the government’s China policy-making Mainland Affairs Council said the people of Taiwan could not accept China’s military pressure and threats which it said had damaged peace in the Taiwan Strait.

“The mainland side should not attribute the consequences of misjudgment to Taiwan. This is an extremely irresponsible act,” it added.

The Republic of China is a sovereign state, the council said, using Taiwan’s formal name, and will brook no slander or criticism from China.

“We sternly warn the other side, do not create incidents again. Only by abandoning armed intimidation, facing up to the reality of the separate control on the two sides of the Taiwan Strait, and having pragmatic communication and dialogue can the differences be resolved.”

Amid the growing tension with China, Taiwan’s defense ministry said on Tuesday it will simulate repelling an invading force, emergency repairs of a major air base and using civilian-operated drones as part of military exercises starting next week.