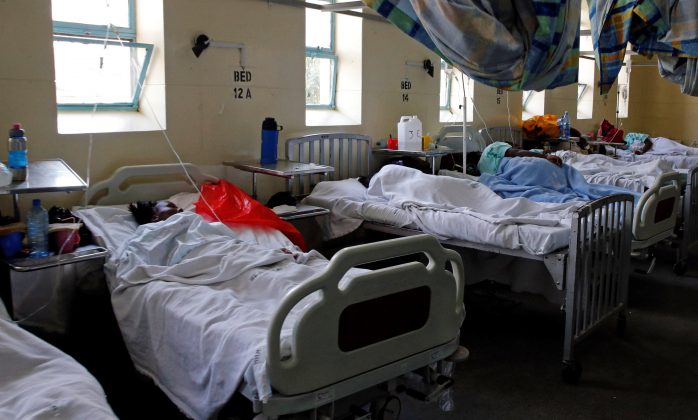 NAIROBI (Reuters) – A cholera outbreak in the Kenyan capital has killed four people since May and the government has shut down a three-star hotel and a popular restaurant there to control its spread, the health minister said on Wednesday.

At least 79 people with confirmed cases of cholera were being treated in various Nairobi hospitals and authorities were setting up 10 more treatment centers to cope with the outbreak, Cleopa Mailu, the minister, told a news conference.

“We have so far closed two hotels … and we shall continue to do so if there is evidence there is risk to the public,” Mailu said, after visiting some of the patients.

The government had ordered the immediate testing of about half a million people in the food handling business in the next 21 days, he said.

Mailu said local authorities in Nairobi would be required to repair all broken sewer lines, ensure all water vendors and their water sources were certified, and ban hawking of food.

“Some of them (measures) will not be pleasant,” he said.

Containing cholera in Nairobi is critical, given it is a major hub, not just in Kenya, but in the region.

Mailu said the Kenya Red Cross and UNICEF were also helping to contain the cholera, a diarrhoeal disease transmitted by infected food and water. It can kill within hours unless treated with intravenous fluids and antibiotics.

Kenya has suffered several waves of cholera since 1971, according to the World Health Organization. An outbreak in March last year killed 216 people with 13,000 hospitalized across the country.

Rotich’s ministry of finance said he did not wish to comment. Mohamed, who is industrialization minister, was not available immediately.