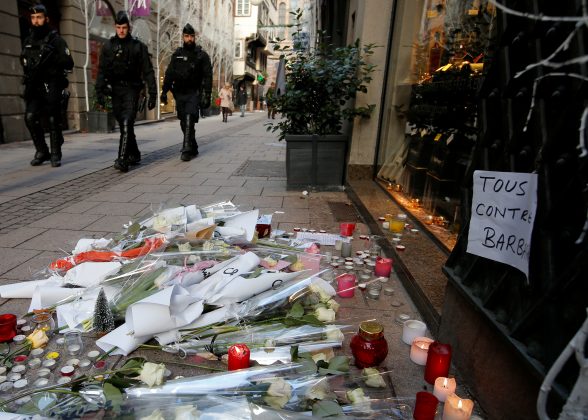 French police walk past flowers and candles that are placed in the Rue des Orfevres street in tribute to the victims of the deadly shooting as they patrol in Strasbourg, France, December 13, 2018. REUTERS/Vincent Kessler

By John Irish and Christian Hartmann

STRASBOURG, France (Reuters) – The death toll in an attack on Strasbourg’s Christmas market rose to three on Thursday as police searched through eastern France and manned checkpoints on the German border in a hunt for the fugitive gunman.

Police issued a wanted poster for Cherif Chekatt, the main suspect in the attack, who was on a watchlist as a potential security threat. Authorities say the 29-year-old was known to have developed radical religious views while in jail.

France has raised its security threat to the highest level in response to Tuesday evening’s shooting rampage, which Strasbourg’s mayor said was indisputably an act of terrorism.

Two people were killed and a third victim who was hospitalized has now died, the Paris Prosecutor’s office said. A fourth victim has been declared brain-dead. At least 12 people were wounded, several of them critically.

More than 700 police were taking part in the second day of the manhunt in Strasbourg, which lies on the west bank of the Rhine river, and the surrounding region.

Armed French and German police manned controls on either side of the Europe Bridge, which spans the frontier. Traffic on the French side was heavily backed up as officers inspected vehicles during the morning rush-hour.

Police in the German town of Kehl, on the opposite riverbank, said they had received several reports of possible sightings on Wednesday but all were false leads.

Asked if French police had been instructed to catch Chekatt dead or alive, government spokesman Benjamin Griveaux told CNews: “It doesn’t matter. The best thing would be to find him as quickly as possible.”

It took police four months to track down Salah Abdesalam, the prime surviving suspect from the November 2015 militant assault on Paris, in an apartment in Brussels. One hundred and thirty people were killed in that attack as well as seven gunmen and bombers. 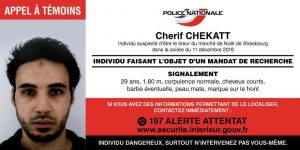 French police posted December 12, 2018 on their Police Nationale Twitter account, a call for witnesses for Strasbourg-born Cherif Chekatt, 29, the day after a gun attack on a Christmas market in Strasbourg, France. French Police Nationale/via Reuters

The Christmas market, a hugely popular attraction in the historic city, remained closed on Thursday.

Witnesses told investigators that the suspect Chekatt cried out “Allahu Akbar” (God is Greater) as he opened fire on the market, a target Paris Prosecutor Remy Heitz suggested may have been chosen for its religious symbolism.

Chekatt’s police file photo shows a bearded man of North African descent, with a prayer bruise on the center of his forehead. He has 27 criminal convictions for theft and violence and has spent time in French, German and Swiss jails.

Neighbors on the housing estate where Chekatt family’s lived described the suspect as a typical young man who dressed in jogging pants and trainers rather than traditional Islamic robes.

“He was a little gangster, but I didn’t see any signs of him being radicalized,” said one local association leader who declined to be named, standing outside Chekkat&rsquo;s apartment building.

The attack took place at a testing time for President Emmanuel Macron, who on Monday announced tax concessions to quell a month-long public revolt over living costs that spurred the worst unrest in central Paris since the 1968 student riots.

Griveaux said a decision had yet to be taken on whether to ban another planned “yellow vest” protest in Paris. The last three consecutive Saturdays of riots in the capital have seen cars torched, shops looted and the Arc de Triomphe defaced.

“We’re simply saying at this stage that, given the events that are unfolding after the terrorist attack in Strasbourg, it would be preferable if everyone could go about a Saturday before the festive holidays in a quiet way,” Griveaux said.

(Reporting by John Irish and Gilbert Reilhac in Strasbourg, Richard Lough in Paris and Michelle Martin and Paul Carrel in Berlin; Writing by Richard Lough; Editing by Angus MacSwan)