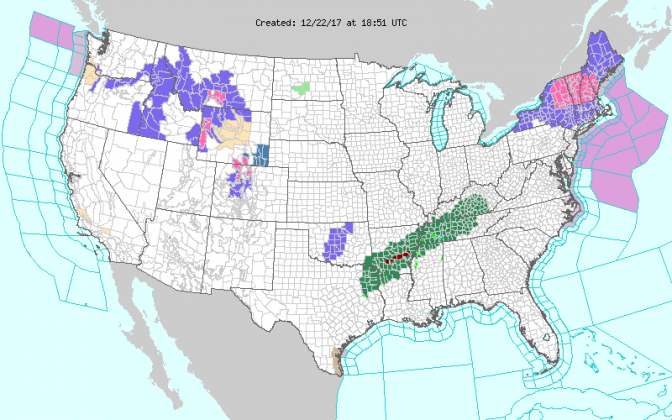 Christmas is the most traveled part of the year with an estimated 107.3 million travelers nationwide from December 23rd to January 1st according to the American Automobile Association. Weather conditions play a major role in getting your family where you want to be.  This Christmas weekend getting to Grandma’s house will have some challenges with a winter storm system blowing across the United States bringing a variety of weather conditions.

If you are headed anywhere in the Northeast be prepared for delays from snow and ice which will make road travel difficult and most likely cause some flight delays.  On the plus side it’s perfect weather for Santa’s sleigh!

Winter storm warnings have been posted for parts of upstate New York and northern New England.  For the rest of New England, northern Pennsylvania, New York State and much of lower Michigan, a winter weather advisory has been issued.

Heavy rainfall and flooding in the lower Mississippi and Tennessee valleys will last into early Saturday while,low humidity and offshore winds will continue to result in elevated-to-critical fire weather conditions across southern California through at least Monday. Dry air continues to be dominant in California.

The West will see a new weather system arriving that will bring snow and gusty winds to the northern Rockies and Northwest which will make poor driving conditions in some areas.  Rain showers will be possible along the Interstate 5 corridor from Seattle to Portland, Oregon.

Flight delays will be possible for the following airports for Pre-Christmas travel:

Atlanta, Cincinnati, Boston, Memphis, Nashville, Oklahoma City, Dallas-Fort Worth, Houston,  St. Louis.  Portland and Seattle. New York, Philadelphia, Washington D.C. and Denver will be most affected by weather delays on Saturday evening into Sunday.  Chicago O’Hare, Cleveland and Detroit  will be on the lookout for flight delays all day on Sunday (Christmas Eve)

Be sure to stay tuned to your local weather stations for current weather conditions, be patient and have a safe and wonderful Christmas!