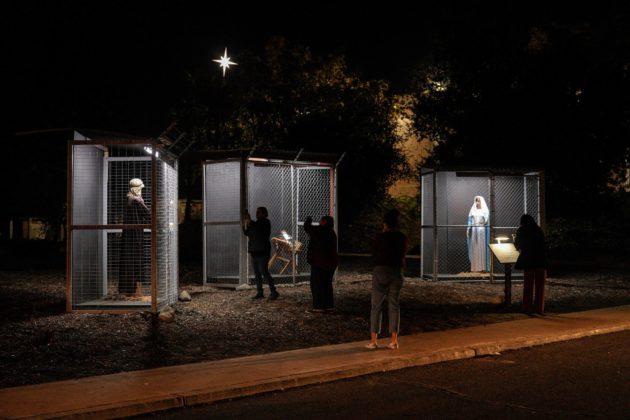 CLAREMONT, Calif. (Reuters) – A Methodist church in Southern California has turned a classic Christmas tradition – the Nativity scene depicting the birth of Jesus – into a statement about immigration by putting the Holy Family in cages.

The United Methodist Church in Claremont, about 30 miles east of Los Angeles, built the display last weekend to draw attention to the plight of migrants and refugees in the United States.

“We don’t see this as political at all, we see this as theological,” said the church’s pastor, Reverend Karen Clark Ristine. “We know that this infant baby Jesus … grew up to be a Christ who calls us to compassion for our neighbor, compassion for one another.”The Nativity display, which was installed Sunday night, shows the Holy family separated in their own cages each topped with barbed wire. The baby Jesus is wrapped in silver Mylar, similar to ones given to migrants at detention centers to use as blankets.

While the church makes no mention of Trump administration policies, some visitors saw it as a slam against the president.

“I think is disgusting. I think it’s political and this is aimed at Trump,” said Tony Papa, who came to the display. “If I were a member of this church, I’d drop out, I really would, it’s very disgusting.”

President Donald Trump has made cracking down on immigration a central issue of his 2020 re-election campaign. His administration has worked to restrict asylum access in the United States in an effort to curb the number of mostly Central American families arriving at the U.S.-Mexico border.

Trump and his top officials have argued that most migrants travel to the United States for economic reasons and lack valid claims to protection.

California, which shares a border with Mexico, has adopted “sanctuary” statutes that limit cooperation with federal immigration enforcement when it comes to rounding up and deporting undocumented immigrants. 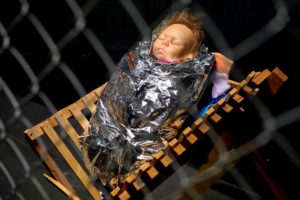 Irene Reyes, a tourist from Arizona, stopped by the nativity scene and became emotional as she talked about its message.”That’s what’s actually happening,” she said about the migrant children detained in cages at detention centers along the border earlier this year. “And it’s like it was brought out to the world and then nothing happened.

“And if you think about it now during the holidays, that these kids, sorry, aren’t with their families and what are we going to do about it? … Like we see it and then we close our eyes to it and it’s not right,” Reyes said.