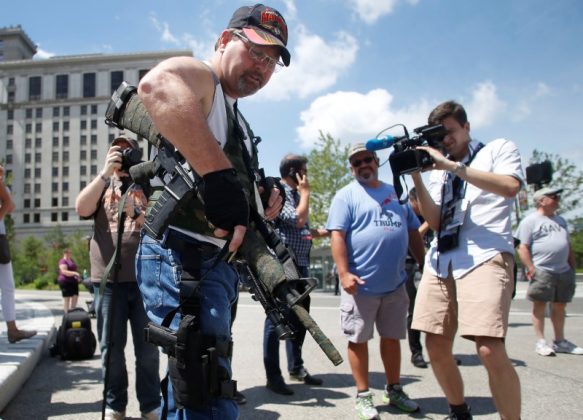 Steve Thacker carrying a rifle and a handgun is surrounded by members of the news media in Cleveland's public square in Cleveland, Ohio, U.S., July 17, 2016. REUTERS/Jim Urquhart/File Photo

But guns are fine.

When Ohio Governor John Kasich on Sunday rejected the Cleveland police union’s request to ban the open carrying of firearms near the Quicken Loans Arena, he weighed into a national debate pitting city authorities who contend with gun violence against state lawmakers who answer to gun-loving voters.

Law enforcement leaders in several major cities say municipalities should have to the power to suspend open-carry laws when needed to protect public safety. Currently, 15 of the 45 states that allow openly carried handguns give cities power to restrict those laws, according to a Reuters review of state statutes.

In Cleveland, police union head Steve Loomis said he made the request to protect officers following recent fatal shooting of three police officers in Louisiana on Sunday and the killing of five officers in Dallas on July 7. Kasich said he did not have the power to circumvent the state’s open-carry law.

A decade ago, all Ohio municipalities had the power to regulate how guns could be carried. Now, only the state legislature can do it.

In 2006, the state legislature passed a law denying cities the ability to restrict openly carried weapons, overriding the veto of then-Governor Bob Taft. Cleveland sued the state to try to win back that power, but lost in 2010.

Across the country, similar battles are playing out in states where municipal authorities, often backed by police departments, are clashing with state lawmakers over how to regulate the open carrying of firearms.

Dallas’s police chief drew criticism from gun rights advocates for saying open carriers made it more “challenging” for his officers to respond to a shooter who killed five policemen at a demonstration this month.

The debate occasionally transcends political ideology. Some opposition to open-carry gun laws comes from Republican politicians such as former Texas Governor Rick Perry, who said last year that he was not “fond of this open-carry concept.”

Police in Milwaukee, Wisconsin, have been trying and failing to restrict the open carrying of guns for years. The state attorney general argues that citizens have a constitutional right to publicly display weapons, which cannot be overruled by city authorities.

“I wish more of our legislators could see past the ideology,” said Milwaukee Police Chief Edward Flynn. “They have no concern about the impact in urban environments that are already plagued by too many guns and too much violence.”

Flynn attracted gun owners’ ire when he told his officers in 2009 to detain open carriers despite the attorney general’s ruling. Flynn said his department has since “adapted” to the state law.

Open-carry advocates say that criminals almost never openly carry firearms. And if law-abiding citizens fail to demonstrate their right to carry guns, they risk losing it, they add.

“We’re sympathetic to law enforcement being concerned about their safety, but that doesn’t mean we give up citizens’ rights just to make it easier to police large events,” said John Pierce, co-founder of national advocacy group OpenCarry.org.

Wisconsin state representative Bob Gannon said he personally is “not a fan” of the practice because it makes people uncomfortable. Still, he said, the right to carry guns in public spaces should be upheld because it is protected by the state constitution.

“The police chief is not an emperor for the state, and he should defer to the state statutes,” he said.

In states where cities can restrict open carry laws, they often have had to defend that right in court.

Colorado passed legislation in 2003 aimed at ensuring a state law on firearms supersedes local ordinances. Denver, the state capital, sued the state to make sure the laws would not affect the city’s longstanding ban on openly carrying firearms.

The city won in 2006 after a 3-3 ruling from the Colorado Supreme Court upheld a lower court ruling in favor of Denver.

“In some parts of rural Colorado, where there’s a lot of critters, some people really like the idea of open carry,” said Dan Montgomery, chief of police of the Denver suburb of Westminster for 25 years before leaving the force in 2010. “Certainly, even in the law enforcement community we have our arch conservatives who strongly believe in it, but for the vast majority of us, it’s problematic.”

Not all cities agree. After a man carrying a rifle opened fire in a Colorado Springs neighborhood last autumn, killing three bystanders, Colorado Springs Mayor John Suthers said he had “no appetite” for tightening the city’s open-carry laws because he did not think such restrictions would improve public safety. Suthers declined to comment for this article.

Little research has been done on the views of open-carry policies among police officers nationwide or even within states, which each regulate guns differently. But studies by two top police organizations in the past year provide some insight.

In Florida and Texas, where open-carry laws were recently debated in the state legislatures, surveys found that a majority of law enforcement leaders opposed them. Open-carry legislation was defeated in Florida but passed in Texas.

In Florida, open-carry advocates will almost certainly try to legalize it again next session, said Bob Gualtieri, chair of the legislative committee of the Florida Sheriffs’ Association, which represents the state’s 67 sheriffs.

The association took a vote on the issue this year and found three quarters of the 62 responding sheriffs opposed open carry.

A 2015 survey of about one-fifth of the police chiefs in Texas also found that three quarters of respondents opposed open carry, according to the state police chiefs’ association, which ran the survey.

The same year, the state legislature passed a law permitting firearm owners with a concealed-carry license to openly carry handguns.

Gualtieri said the Dallas shooting illustrated the way people who openly carry guns can hinder law enforcement responses to active shooter scenarios. Dallas police said up to 30 people were carrying rifles during a protest on the night that a man opened fire on police officers, complicating law enforcement’s attempts to identify the gunman.

“Not a single one of these people carrying firearms out there in Texas caught this guy in what he was doing,” Gualtieri said. “It drained law enforcement resources and subjected citizens to being unnecessarily taken into custody, and I think we should all be very grateful that nobody else got hurt.”