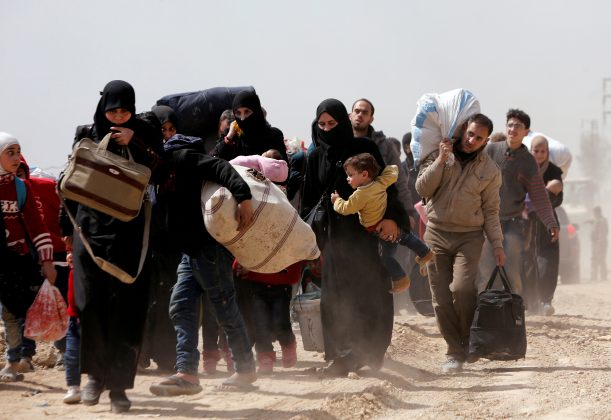 FILE PHOTO: People walk with their belongings as they flee the rebel-held town of Hammouriyeh, in the village of Beit Sawa, eastern Ghouta, Syria March 15, 2018. REUTERS/Omar Sanadiki

BEIRUT (Reuters) – Thousands of civilians were fleeing from besieged enclaves on opposite ends of Syria on Friday as two major battles in the multi-sided civil war entered decisive phases, with hundreds of thousands of people trapped in the path of both assaults.

Air strikes killed dozens of people in eastern Ghouta, a war monitor said, and weary residents streamed out on foot for a second day as Russian-backed government forces pressed their campaign to capture the last big rebel bastion near Damascus.

The Kurdish YPG militia, defending Afrin, said it was battling the Turkish forces and their Syrian militia allies who tried to storm the town from the north.

The two offensives, one backed by Russia and the other led by Turkey, have shown how Syrian factions and their foreign allies are aggressively reshaping the map of control after the defeat of Islamic State’s self-proclaimed caliphate last year.

The Syrian war entered its eighth year this week having killed half a million people and driven more than 11 million from their homes, including nearly 6 million who have fled abroad in one of the worst refugee crises of modern times.

The government launched its assault on eastern Ghouta a month ago, and Turkey began its cross-border campaign in Afrin in January. In both cases, hundreds of thousands of civilians have been trapped inside areas encircled on the battlefield.

Backed by Russia and Iran, government forces have thrust deep into eastern Ghouta, splintering the area into three separate enclaves. The United Nations believes up to 400,000 people have been trapped inside the rebel-held area of densely populated farms and satellite towns on the outskirts of the capital, with virtually no access to food or medicine.

For the first time since the government unleashed the Ghouta offensive, one of the deadliest of the war, residents are fleeing in their thousands, carrying children and belongings on foot from rebel-held territory to reach government positions.

Moscow and Damascus accuse the rebels of having forced people to stay in harm’s way to use them as human shields. The rebels deny this and say the aim of the government assault is to depopulate opposition areas.

The Observatory said air strikes in eastern Ghouta killed 47 people in the town of Kafr Batna and another 10 people in Saqba on Friday. It said Russian aircraft had carried out the strikes. Syrians believe they can distinguish Russian aircraft from those of the Syrian army because the Russians fly at higher altitude.

Syrian State TV broadcast footage of men, women and children walking along a dirt road near the town of Hammouriyeh, many of them carrying bags, to escape rebel-held areas. Some waved to the camera and said the rebels had stopped them from leaving.

Russian news agencies reported that around 3,300 people had come out on Friday morning. An army officer at Hawsh Nasri, where hundreds of people gathered, told Reuters that many more people were expected to leave on Friday.

Around 5,000 people were sheltering at the nearby town of Adra and many more would arrive on Friday, the Adra mayor said. “Today we are expecting a big number,” Jassem al-Mahmoud said.

The exodus began on Thursday with thousands fleeing the southernmost of the three Ghouta pockets. Russia said more than 12,000 people left on Thursday.

The eastern Ghouta town of Douma, where many people are sheltering, has been spared the worst of the shelling in recent days, a resident said.

During campaigns to recover other areas, the Syrian government has taken territory by allowing rebel fighters and opposition activists safe passage out to insurgent-held areas at the Turkish border. Russia has offered similar safe passage to rebels who leave eastern Ghouta, but so far they have refused.

The Ghouta and Afrin campaigns have both continued despite a U.N. Security Council demand for a ceasefire. Moscow and Damascus argue the enemies they target in Ghouta are terrorists unprotected by the truce. Turkey says the same of the Kurdish YPG militia it is fighting in Afrin.

The foreign ministers of Turkey, Iran and Russia convened a meeting in the Kazakh capital Astana to discuss the situation in Syria. The three states last year agreed to contain the conflict on several fronts with “de-escalation zones”, while simultaneously pursuing own military objectives in Syria.

Turkey wants to crush the YPG which it views as an extension of the Kurdistan Workers’ Party (PKK), which has waged an insurgency in Turkey. The United States views the YPG as a valuable partner in its war against Islamic State in Syria.

A spokeswoman for the U.N. refugee agency UNHCR said it had received “deeply alarming reports from Afrin in northwestern Syria about civilian deaths and injuries due to airstrikes and ground-based strikes, as well as reports that civilians are being prevented from leaving Afrin city by Kurdish forces.”

Lebanon’s Al-Mayadeen TV broadcast footage from the Afrin area showing cars, small trucks, tractors and groups of people on foot leaving the town. An elderly man told the channel he had left on foot at 2 a.m. when shells started falling.

“There are a lot of people leaving the city as well, and a lot still inside,” he said.

Birusk Hasakeh, the YPG spokesman in Afrin, said the Turkish forces and their Syrian rebel militia allies were trying to storm Afrin from the north. The YPG and its all-female affiliate, the YPJ, were battling the attacking forces.

“They are shelling in order to storm (Afrin),” Hasakeh said by phone. The shelling had killed 18 people and more people were believed to be trapped under rubble, he said.

The spokesman for Turkish President Tayyip Erdogan said on Thursday that Turkey expected its forces and rebel allies to clear Afrin town of militants “very soon”.

(Reporting by Tom Perry and Dahlia Nehme in Beirut, Firas Makdesi in Damascus, Jack Stubbs in Moscow and Tom Miles in Geneva; Writing by Tom Perry; Editing by Peter Graff)