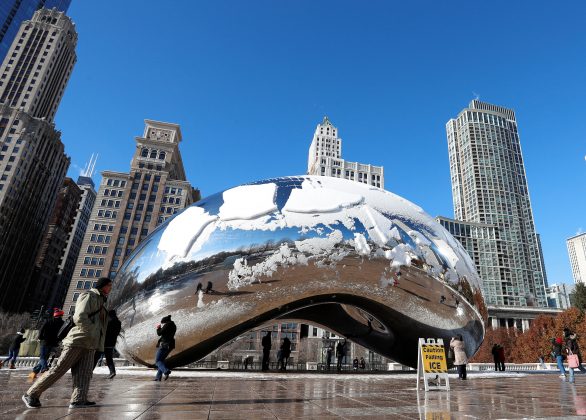 (Reuters) – Arctic air blowing through Chicago and other parts of the U.S. Midwest was expected to keep the region under a deep freeze on Wednesday, as residents of Oregon were blanketed with snow from a separate weather system, forecasters said.

Temperatures in Chicago, the nation’s third largest city, were expected to plunge to between 13 and 22 degrees Fahrenheit (minus 11 to minus 5 degrees Celsius) with a wind chill factor as low as minus 15 degrees Fahrenheit, the National Weather Service said in an advisory.

Arctic air spreading from Canada across much of the northern United States this week has led authorities to warn people against frostbite.

The Midwest was expected to experience colder weather than on Tuesday, at the outset of the arctic air blast, National Weather Service meteorologist Andrew Orrison of the agency’s Weather Prediction Center said by telephone.

“People certainly, if they’re going to be out and about, need to dress warmly and wear multiple layers of clothes,” Orrison said.

A few inches of snow could fall on areas around the Great Lakes in Michigan and New York state, he said.

But snowfall from another storm coming to the Pacific Northwest and Northern California was likely to cause greater havoc for people’s travel plans than the snow around the Great Lakes, Orrison said.

The snowfall is due to a Pacific low pressure system and expanding moisture, National Weather Service officials said in a national advisory.

Between 4 and 8 inches (10 and 20 cm) of snow could fall in central and eastern Oregon, with the Cascade mountain range in the Pacific Northwest receiving up to 1 foot of snow, Orrison said.

The weather system that will cover parts of the Pacific Northwest with snow was expected to spread eastward later in the week.

Meanwhile, the blast of arctic air that has placed the Midwest under a deep chill will also blow eastward, bringing potentially record low temperatures to parts of the mid-Atlantic region on Thursday, Orrison said.

Cities from Boston to Washington will feel the chill beginning on Thursday and lasting at least until Friday, he said.

“For these areas it will be the coldest air of the season so far,” Orrison said.