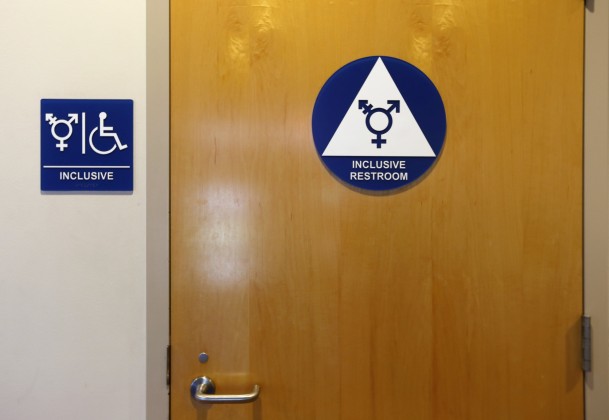 A gender-neutral bathroom is seen at the University of California Irvine campus in Irvine, California, United States on September 30, 2014. REUTERS/Lucy Nicholson/File Photo

BOSTON (Reuters) – As lawmakers across the United States battle over whether to allow transgender Americans to use public restrooms that match their gender identities, universities are scrambling to ensure that dorms meet federal standards.

At a time of year when the nation’s 2,100 residential colleges and universities are sorting out student housing assignments, they also are poring over a May letter from the Obama administration that thrusts them into the national debate on transgender rights.

Known as the “dear colleague” letter, it makes clear that federal law protects transgender students’ right to live in housing that reflects their gender identity.

Schools that fail to provide adequate housing to transgender students could face lawsuits or the loss of any federal funding they rely on.

Although hundreds of universities had begun to offer gender-inclusive housing in response to student demand in recent years, many are now reviewing or expediting their plans so they can provide the option to incoming students for the first time this fall.

The policies are intended not only to accommodate transgender students, university officials say, but to help siblings, gay students who want to live with straight friends of the opposite gender or simply groups comfortable with mixed-gender housing.

The May letter from the U.S. Departments of Education and Justice invoked Title IX, the 1972 law prohibiting gender discrimination at schools that receive federal funds.

“Title IX and the ‘dear colleague’ letters make all of us, all institutions, more accountable for students who may be on the margins,” said Darryl Holloman, dean of students at Georgia State University, which offered gender-inclusive housing options for the first time in the 2015-2016 academic year.

‘ONLY A MATTER OF TIME’

There are no official U.S. statistics on the number of colleges that offer gender-inclusive housing, although a count by Campus Pride, a non-profit that focuses on supporting the rights of lesbian, gay, bisexual and transgender students in U.S. higher education, found it could be as low as one in 10.

The author of that study, Genny Beemyn, director of the University of Massachusetts at Amherst’s Stonewall Center, acknowledged the count, which shows just 203 universities, may underestimate the number of schools that offer gender-inclusive housing.

“More and more schools are grappling with it,” Beemyn said. “It’s only a matter of time until this becomes a much bigger issue.”

Universities in the Northeast and along the West Coast have been quickest to allow gender-inclusive housing, with those in the South and religiously affiliated schools least likely to do so, according to observers, including Demoya Gordon, transgender rights project attorney with Lambda Legal, an LGBT rights advocacy group.

The Association of College and University Housing Officers-International has seen an increase in the number of questions it gets about transgender housing, said spokesman James Baumann.

“It is certainly something that has gained momentum,” Baumann said. “When I first started 10 years ago the questions was, ‘Should we?’ And now the question is, ‘How can we?'”

The same letter that has universities examining their transgender housing policies sparked a broader fight by telling U.S. public grammar and high schools to allow transgender students to use bathrooms and locker rooms that reflect their gender identities.

Thirteen U.S. states joined a lawsuit accusing the Obama administration of overreaching, attempting to add transgender protections to a 1972 law that never mentioned the subject.

The university moves have been less controversial in part because the population affected is one of the segments of society most comfortable with transgender issues.

Some 57 percent of 18- to 29-year-olds told a Reuters/Ipsos poll taken April 14 through May 3 that they believed people should use public restrooms that match the gender with which they identify. That is a far higher percentage than the 40 percent of Americans of all ages who held that view. The poll included responses from 6,723 people and has a credibility interval of 1.4 percentage points.

Few students are choosing gender-inclusive housing. At Georgia Tech’s Atlanta campus, 42 out of some 4,100 students housed in dorms sought it last year.

When Johns Hopkins University first offered it in the 2014-2015 academic year, 30 out of some 2,500 students enrolled, a number that doubled to 60 the following year.

“There are certainly some transgender students for whom it matters a lot but if it’s a gay man whose best friend is a lesbian and they decide they want to live together, this is an option,” said Demere Woolway, director of LGBTQ life at the Baltimore university.

College officials interviewed also emphasized they have no plans to phase out traditional gender-segregated housing.

“We have students … who want to maintain spaces where they are with people who have the same gender identity,” said Elizabeth Lee Agosto, senior associate dean of student affairs at Dartmouth College in Hanover, New Hampshire, which has offered gender-inclusive housing since 2007. “It’s important to have the full spectrum.”