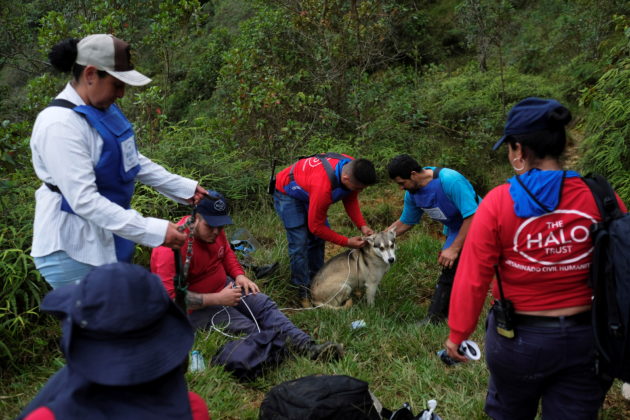 Members of the international landmine clearance charity HALO Trust and a farmer tie up a dog to keep it safe as they search for landmines, in Carmen de Viboral, Colombia July 13, 2021. REUTERS/Santiago Mesa

(Reuters) – A non-profit organization is teaching children in rural Colombia how to identify landmines placed near their communities by armed guerrilla groups during the country’s long civil war.

Since 2013, the HALO Trust Foundation has created programs to deactivate anti-personnel mines in the regions of Antioquia, Meta, Tolima, Cauca, Valle del Cauca, Nariño and Putumayo. So far, they have been able to declare 900 free of mines. They also teach children and their communities about the risks of the mines, how to spot them, and what to do if they find one.

“Younger people do not know how to correctly identify explosive artefacts. This has always been and still is a concern,” said community leader Juliana Arango.

According to the HALO Trust Foundation, since 1990 around 12,000 people have been injured or died in Colombia because of undetonated explosives.

“We try to… create safe surroundings for the communities, to reduce the problem of the anti-personnel mines and also reduce the accidents they cause,” said Juan Jose Granada, who works for HALO Trust.