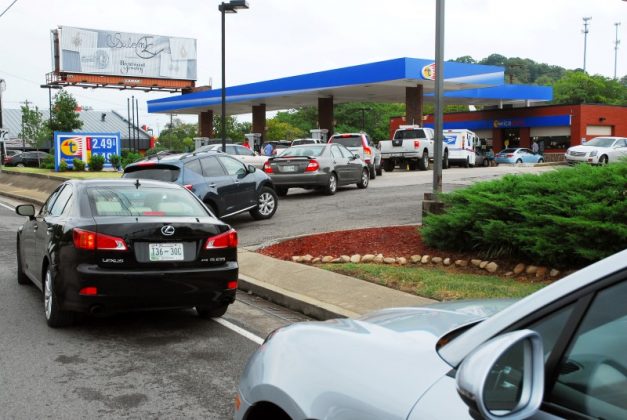 NEW YORK (Reuters) – United States.Colonial Pipeline Co said it expects a full restart of its gasoline line by Wednesday evening after its biggest leak in nearly two decades squeezed supply and led to increased prices at the pump in southeast

The biggest refined products system in the U.S. restarted parts of the line a few days after a leak was discovered on Sept. 9. The damaged section of the 1.3 million-barrel-a-day line that connects the refining hub of the Gulf Coast to the East Coast has been shut for more than 12 days.

Motorists have faced long lines and shortage of fuel in many states across the southeast, such as North Carolina and Tennessee.

Consumers are expected to feel the pinch for slightly longer, until the supply chain is fully restored after the 6,000-8,000 barrel leak in Shelby County, Alabama.

Prices in Georgia, one of the most affected, inched up by another cent on Wednesday, with a gallon of regular gasoline currently at $2.372, about 28 cents higher than last week’s average prices, according to motorist advocacy group AAA.

The outage led to a record drop in inventories in the East Coast and sent Gulf Coast gasoline stockpiles soaring to record highs.

The company built a section of pipe to bypass the damaged portion, in order to restart operations quickly. The U.S. Department of Transportation Pipeline and Hazardous Materials Safety Administration (PHMSA) approved the operation of the bypass as a temporary measure to restore service, late Tuesday.

That approval, however, does not affect the terms of the Corrective Action Order PHMSA issued on Sept. 16.

Colonial said it successfully tested and completed the connection of the bypass segment to the main line on Wednesday morning.

After the line is restarted, Colonial will work with federal, state and local officials to remove the damaged segment of the original line and also try to determine the cause of the leak. It was discovered on Sept. 9 by a mining inspector who smelled a fuel odor.