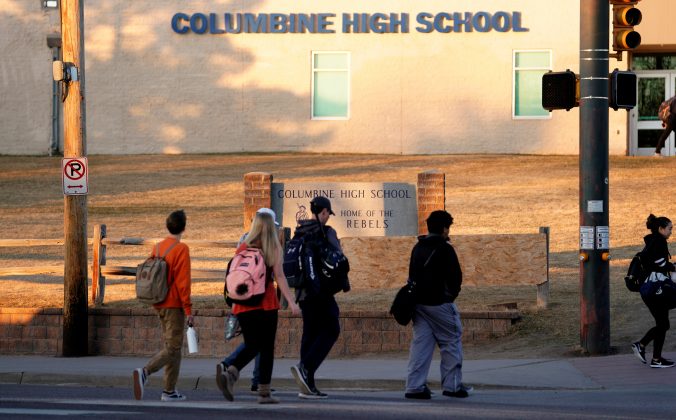 DENVER (Reuters) – Public education officials in Colorado are considering a plan to tear down and rebuild Columbine High School, saying the site remains a “source of inspiration” for potential gun violence 20 years after a mass shooting there left 15 people dead.

The idea was floated on Thursday in an open letter from the superintendent of Jefferson County public schools, Jason Glass, to Columbine staff, students, parents and members of the surrounding Denver suburb of Littleton, Colorado.

The proposal calls for placing a bond measure seeking $60 million to $70 million on a future ballot to pay for demolition of the existing school and construction of a new school to replace it just west of the current site.

Under the superintendent’s plan, the new campus would still be called Columbine High School, “honoring the pride and spirit the community has with the name,” and its school mascot and colors would remain unchanged.

The county Board of Education and administration are “in the very preliminary and exploratory stages” of discussing such a plan, and are seeking public feedback on the proposal, Glass said.

He cited numerous instances in which actual or would-be perpetrators of violence expressed a fascination with Columbine, including an 18-year-old Florida woman who shot herself to death in April after she sparked an extensive manhunt by traveling to Colorado days before the 20th anniversary of the 1999 massacre.

In 2010, 29-year-old twin sisters from Australia, obsessed with the shooting, traveled to Colorado and shot themselves at a local gun range in a suicide pact. One of the women survived, and police found among their belongings a photocopy of a news magazine cover depicting the Columbine killers and their victims.

The Columbine site, Glass said, “continues to serve as a source of inspiration for potential school shooters, and its lasting impact only seems to be growing.”

Fifteen people were killed in the Columbine rampage, which at the time ranked as the deadliest school shooting in U.S. history. Two high school seniors shot and killed 12 classmates and a teacher before taking their own lives in the bloodshed on April 20, 1999.

The now-retired principal of Columbine during the massacre, Frank DeAngelis, 64, said Glass had sought his opinion before going public with the demolition idea, and he thought it was a “good plan.”

“Twenty years ago, we never imagined that there would be people so infatuated with this tragedy years later,” DeAngelis said. “Maybe moving the physical plant would alleviate some of the issues.”

Aside from numerous threats and the hoaxes the school has received over the years, curiosity seekers would take pictures of their children in front of the school with the Columbine sign in the background.

“It became a tourist attraction,” he said.